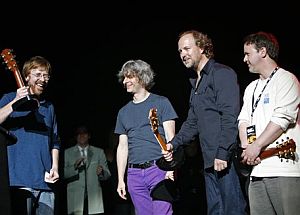 Fans of Phish, the Clinton-era jam band road hogs, had high hopes for a reunion last night when the band appeared at the Theater at Madison Square Garden to accept a Lifetime Achievement award at the 7th annual Jammy Awards. But instead the four members gave polite acceptance speeches and walked off without so much as an a cappella “Freebird.”

The event was guitarist Trey Anastasio’s first public appearance in New York since entering a drug rehabilitation program in Saratoga; in February 2007 the musician was indicted on felony drug charges after being pulled over for DUI in Whitehall, New York. In his speech last night, Anastasio told the audience, “I feel such gratitude. I was honored to watch everybody dance.”

Anyone who’s ever witnessed the “dancing” at Phish shows can only imagine what drugs Trey must have been on to feel honored. But reports from last night indicate that Anastasio was clean and sober as he joined Beatles tribute band Fab Faux for renditions of "While My Guitar Gently Weeps" and "Everybody's Got Something to Hide Except Me and My Monkey."

Between acts, which included Galactic, Keller Williams, and a Chevy Chase cameo, the roof rattled from the other gig at the Garden last night: Jay-Z, who sat in with Phish at a Keyspan Park gig in 2004. Rumors of another Phish/Jay-Z 99 Problems > Big Pimpin' cover also turned out to be pipe dreams.