In August 1974, Philippe Petit, a Frenchman with a passion for walking on wires, captivated New York City as he stealthy made his way to the top of the World Trade Center. Once there, he walked across a cable strung between the Twin Towers, a historic feat that's vividly depicted in a new documentary, Man On Wire (which will be screening tonight). The famous walk turned a void 1/4 mile above the streets into a stage, and made Petit into an instant "folk hero." He now lives upstate in Woodstock, and yesterday we talked with him about those 45 minutes between the towers, that first daring step onto the wire, and the ones that followed.

When did the idea for the walk between the Twin Towers come to you? In 1968 I was 18 years old and I saw an article about those towers. There was a photo of a model, and the article said that they would be built one day, and they would be the finest in the world. And here I was, a completely new self-taught wire walker, and I thought, "What a fabulous thing to transform the top of those towers to a theater for one morning." And that's how the idea came.

Do you remember one particular moment from that 45 minutes more prominently than any other? Well, yes and no. Of course the very first step, as you can imagine, was a giant first step. But a few moments during those crossings I remember perfectly. But that first step was a giant moment for me: I was finally stepping in to my dream. So I remember that vividly. And at some point I stopped on the wire and I sat down, and I looked down all the way - a 1/4 mile to the empty plaza below - and I stopped and saw the crowd gathering around that plaza. Yes, I remember very well many, many moments in those 45 minutes.

Can you describe at all what you were feeling when you took that first step? Yeah, I was extremely happy after all those years of dreaming and months of working on it, that now the dream was reality. And I was very concentrated and focused, in an open way, listening to everything, so that if there was a threat of some kind I would feel it. It was very delicate, because I had not seen the anchor point on the other side. Usually when I walk on a wire I inspect the anchor point on both sides before crossing. So here, my friend did it on the other side with my instructions, but I had not seen it. So it was very difficult. But after just a few steps - as I could see later from pictures taken by my friend on the north tower - I had an immense smile on my face. So obviously it was only a few steps that were fragile and delicate. 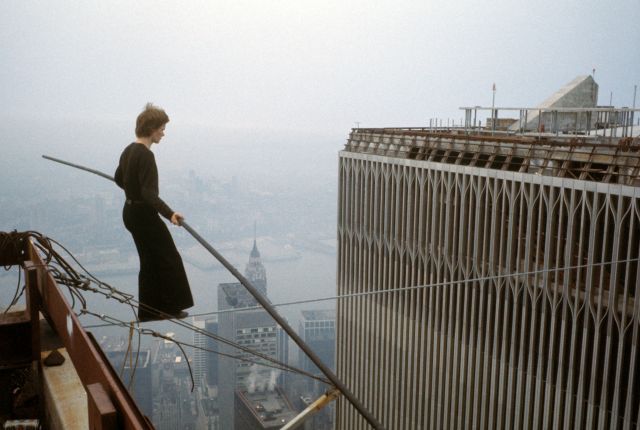 For me, just looking at the photos and pieces of the film, just seeing it I'm terrified - and my feet tingle, I have this visceral reaction to it. Yeah, it's very normal when you're not used to the world of the hire wire, it's very normal to be simply terrified. The reason I'm not is because I've done it for so many years. And also learning by myself I have had plenty of time to get to know the wire and to make sure I was in a safe world.

So you didn't feel any fear during the experience? No, no. I felt an immense elation, and that I was actually venturing in another world. Literally a world where man is not really allowed. There was some turbulence also, where the air current was moving me around, so it was another world and I was an explorer there.

They're proposing a bill that, if you did what you did today there would be a fine of $1,000 and jail time. How do you feel about the passage of a law like that? Oh it's so upsetting, ridiculous, I don't even want to use the cellular [phone] to even talk about it. I don't care what the laws are. This is absurd and a sign of the illness of our era.

You've been arrested some 500 times, what was the worst? Well the worst one was the arrest at the World Trade Center. It was quite violent. I've been arrested many times for illegal hire wire walking and illegal street performing. But in the street in a few countries they are rough. They steal your equipment, they beat you up, they throw you in jail, you cannot call anybody. But in some countries it's just with a big smile, saying, "You cannot perform here, move immediately." So it depends on the country; there have been some rough arrests, but it doesn't matter. I don't care.

But after the World Trade Center the police handled you roughly? Just when I gave myself to them on the very top, after they had been waiting. You can imagine they were irate and frustrated and impatient and just jumped on me. But very soon after that I was a folk hero and they asked for autographs and put their hands around my shoulder for pictures.

If you were going to try to do something in the same spirit as that in New York City today, is there anything that you would consider doing? Well, I continue to have in my mind some illegal walks, of course. But we live in a different time now, and suddenly in a big city like New York, if I'm caught by the powers that be at the top of a building with some equipment, I would be shot first and asked questions later. I think it's probably impossible, and yet what I do in my life is I tackle the impossible.

I read that Debra Winger has been helping you raise money for a walk across the Grand Canyon. She's an artist friend and like many of these friends she's trying to help me with some of my projects. So at some point there was a desire to make this project happen, but it didn't happen yet, although it was very close, and it's still an open project.

Have you been approached by any companies for sponsorship. Right after my Twin Towers walk I was approached by hundreds of people and I said no to all the offers. I could have become a millionaire overnight obviously, but I said no, and I continue to be uninterested.

Why is that? I don't know, I don't want to use my art to sell a pair of shoes or a beer. In this country it's completely accepted, but in my heart, a different country, it's unacceptable.

#hire wire
#interview
#man on wire
#philippe petit
#walker
Do you know the scoop? Send us a Tip