Park Slope stroller-pusher Peter Sarsgaard's first major film role was in Dead Man Walking, but he really caught everyone's eye in 1999 with Boys Don't Cry—ever since he's been reason enough to see pretty much anything from Garden State to Jarhead. Last season he made his Broadway debut in the critically-acclaimed production of The Seagull, which transferred from London. In it, he played the self-absorbed novelist Trigorin, who effortlessly seduces the wide-eyed Nina, portrayed by the arresting Carrie Mulligan.

As it turns out, this was his second time portraying Mulligan's love interest; the two had already finished production on An Education, which opens in New York tomorrow. Adapted by Nick Hornby from a short memoir by journalist Lynn Barber, the film tells the true story of a suburban London school girl's romantic affair with a seemingly sophisticated thirty-something gadabout, played with irresistible charm by Sarsgaard. We spoke with the actor earlier this week about An Education, The Seagull, and his favorite thing about Brooklyn.

Without giving too much away, it becomes clear pretty quickly in the film that your character is a 30-something man who pursues a 16-year-old schoolgirl. And that's something that a lot of people would probably find revolting. So what was your immediate reaction to the character? It's hard to remember really, to be honest. I would say that it didn't seem like he wanted to have sex with her. That was one of my first reactions, which was interesting because you get told what this story is and you think it's going to be Lolita or something. But that's not what he's attracted to. I think he's attracted to youth, which is something that he missed.

I think he actually wants to be her age. I think he thinks he's her age some of the time, and I think he is someone who has a very difficult idea of accepting the circumstances of his own life, and so, like a lot of people—and I mean a lot of people—he is very capable of explaining his life to himself as something that it isn't, and living in a kind of false reality, and living in a bubble of a fantasy. And that's how everybody always ends up doing everything, you know? I mean, there are very few people that wake up every morning and say "I'm going to do something today that is wrong," you know? And then go and do it.

And part of the actor's job is to find a way is to empathize with the character and not stand in a position of judgment. Yeah, to be honest I didn't find it very difficult with this guy. I've played so many people that were far worse. Rapists and killers and drug dealers and things. And a lot of what he wants is quite positive, albeit he goes about it the wrong way. I think what draws them together is that they both want to experience more of life. They both want more; they both want to feel more, see more, experience more art, more love, more all of that. They're both romantics, really.

What would you say your biggest challenge was in tackling the role? For a while I was concerned about playing Jewish; I didn't know how to do that! [Laughs] But more than playing British I would say to my wife [Maggie Gyllenhaal], who's Jewish, "How do I play Jewish?" And she'd say, "You don't have to play Jewish. Jewish is something that just is." And you know, any kind of ridiculous idea you might have about how to play Jewish will end up being detrimental to the film. So once I got around that, that was nice. 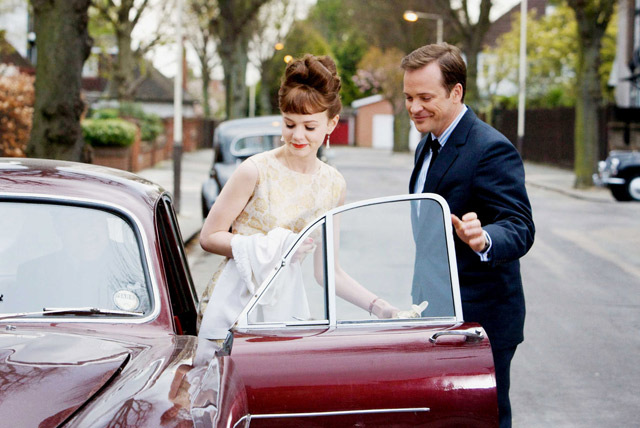 And the film is really set in this very specific time period. Watching it, it was difficult to separate the film from the time which it takes place. Did you do any research about what England was like at that time? Mainly through Nick [Hornby], actually. Before we started; he and I would sit and talk about it. Nick is kind of an encyclopedia of everything. It's kind of extraordinary. It's what makes his writing so detailed, he can get down the patois of High Fidelity or this movie, and have all of the details of the references and everything. And all of that literal stuff he'd talk with me about. But my folks came of age in the '50s in Mississippi. And while it's very different, there are similarities. My parents were more likely to listen to the Brothers Four than the Rolling Stones. So there's a certain kind of innocence that both my parents, I feel like, had. They married each other without virtually dating anyone else. Most people did then.

It's incredible when I think about how different it was. Yeah, there were just different standards for love and romance, I would say. To be a romantic, like a lot of people are these days, doing ridiculous things and the kind of things that she and I do in the film, is more common now than it was, probably because of the '60s.

And to her father in the film, that seems so foreign.
Yeah, I mean, look, I remember when my dad worked for the Air Force and he wanted to go work for IBM, and his dad just said do not leave the job you have for another job, with that kind of fear that the most important thing in your life is to take care of your finances, is to be financially sound so you have the most freedom. So she has to find some way to support herself because her father is not going to be with her forever, and he worries about that, so it's like living out of fear. Never advisable.

And your co-star in the film, Carrie Mulligan, was also in The Seagull with you on Broadway. Which project came first? This one, the film.

Did that lead to one of you deciding to do the Seagull? She had already done The Seagull in London, and when she came in to read for this film, she was doing that play. And then when we started filming, it took them a while to transfer to New York, and she said, "Oh, they're looking for Trigorin. Our Trigorin isn't coming to New York." So I gave her a list of names of all my friends who are out of work, and I imagine they went through some, or didn't, but about a week later she said they're going to offer me the part. And I thought, I can't do that, I have a child, I'm not doing that.

And then I thought about it and talked about it with my family, and realized that it could work out because I'd be in New York and it wouldn't count as one of my turns working, maybe. [Laughs] Because we take turns a lot of the time. And I always wanted to do it, primarily just to work with her again. I mean, we had a lot of our scenes together and would be together again. We enjoy each other's company and respected each other's talent, and that's rare. 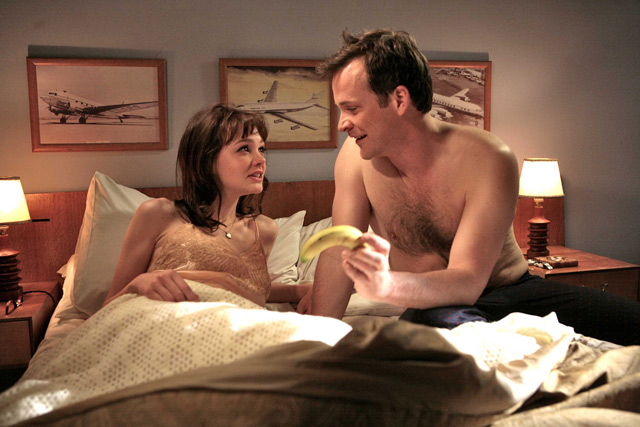 Do you think the work on the film influenced the work on the play, or is that just a romantic idea? I'm certain it did. Everything affects everything in acting. It's like, if two people have an affair on a movie set; the love scenes don't work. It's like, you can't separate it. I mean, that's our job, to incorporate all of it. I see certain scenes in the film that were shot earlier, and they resonate as scenes that were shot earlier to me. And there's more distance between the two of us, which is nice at times. I think one of the interesting things about the film is that we don't get closer and closer and closer. I think that's the model, that's people's expectation of what's going to happen. I think even before the reveal that there's a lot more going on, it's not going the way you expect it to go, the way you keep waiting for the romantic flow to happen somewhere.

Was that actual rain? No, that's rain towers. In a littler film there are two big no-nos. One of them is rain, and the other one is shooting on a boat. And luckily we didn't shoot on a boat.

#an education
#interview
#Peter Sarsgaard
Do you know the scoop? Send us a Tip