You may know Pete Fornatale from his voice on WFUV, but after reading Back to the Garden: The Story of Woodstock, you'll know him as your personal time machine back to 1969. His book contains plenty of stories from the weekend, as well as original interviews with The Who’s Roger Daltry, Joan Baez, David Crosby, Richie Havens, Joe Cocker, organizers, and fans. Tonight you can get a combination of the voice and the stories, as he'll be reading at Borders in Columbus Circle (7 p.m.); and recently he told us a little bit about the good ol' days... and how they'll never happen again, no matter how many anniversary concerts are planned.

Where did you grow up? How has the neighborhood changed throughout the years? 512 East 188th Street, Bronx “58” New York. Used to be almost exclusively Italian-American, now, thankfully, reflects our cultural diversity.

The story of Woodstock has been told many times, what inspired you to tell it again? Curiosity: young people who missed it by an accident of birth are intensely interested in the event, the music and the musicians

Nostalgia: I love the past, I just don’t want to live there! However, a mental vacation every once in a while to a time in our lives with less responsibility and GREAT music is a very healthy thing.

Mortality: The average age of Woodstock attendees was between 15 & 30. That means the 15 year olds are 55 this year and the 30 year olds are 70! Looking back on their lives at this stage, they want to hold onto things that truly meant something to them in their youth. Woodstock is one of those things.

What is different about your book from the others? At my editor and son’s suggestion (Peter Thomas Fornatale), our book focuses primarily on the music and the musicians. We tell the story from Richie Havens on Friday at 4:07pm right up to Jimi Hendrix on Monday at 10:30am. It is also equal parts oral history, and my narrative view from the catbird seat I occupied at WNEW-FM. 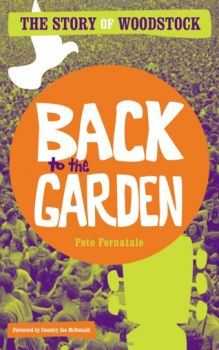 What were the top performances at Woodstock, in your opinion? Richie Havens, Joe Cocker, Sly and the Family Stone, The Who, Santana and Jimi Hendrix

What is one of your favorite memories from those three days? Henry Gross of Sha Na Na (the youngest performer to take the Woodstock stage. That’s right, it WASN’T Michael Shrieve!) telling me about his drinking adventure with Hendrix and his smoking adventure with Garcia. He punctuated the story by telling me, “There were three tons of marijuana consumed at Woodstock and NOT ONE reported case of glaucoma!”

Did you make it to any of the anniversary concerts of the past? Let me make this clear: There was nothing like Woodstock before it; nothing like it since; and there NEVER will be again in our post-9/11 world! Any so called “anniversary” concert (especially 1999) is/was bogus and exploitative and has NOTHING to do with what happened during those three days in August of 1969!

What would you have done for the 40th anniversary as far as an event commemorating it? A four hour radio special on WFUV on Saturday, August 15th. In fact, that is EXACTLY what I am doing!

Please share your strangest "only in New York" story. The story about Poco in my liner notes for their Deliverin’ album. They were playing at the old Felt Forum at MSG with the Moody Blues. I got in a cab with a long-haired hippie-type driving. I took a chance and said, “The Poco concert please.” He responded, “Madison Square Garden coming up!” AND, he didn’t charge me for the ride!

Which New Yorker do you most admire? Dion

Given the opportunity, how would you change New York? The traffic nightmare! As Johnny Carson once said, “I would make all the streets one way going west. Then it would be New Jersey’s traffic problem.”

Under what circumstance have you thought about leaving New York? Sitting for an hour not moving on the belt parkway or Cross Bronx Expressway, not because of an accident on my side of the highway, but because of all of the assholes rubbernecking at an accident ON THE OTHER SIDE of the highway! AAARRRGGGHHH!!!

Do you have a favorite New York celebrity sighting or encounter? Elliot Gould twice within 20 minutes somewhere along 57th street. The first time I said hello and he said hello back. The second time I said “We’ve got to stop meeting like this,” and he ran across the street to get away from me!

Best cheap eat in the city. There is none.

Best venue to hear music in the city. The Bottom Line. Unfortunately, NYU forced them out years ago. I’m sorry, but NOTHING beat seeing Springsteen at The Bottom Line in August of 1975!

How are things at WFUV? On Saturday from 4 to 8pm, things are GREAT!

#author
#Back to the Garden
#deejay
#interview
#Pete Fornatale
#WFUV
#woodstock
Do you know the scoop? Send us a Tip