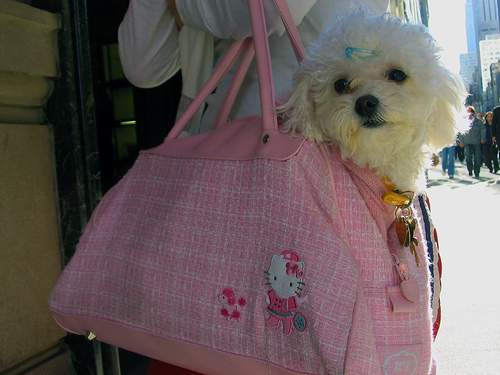 Time Out NY has a list of PETA's most wanted in the city. The organization has 25,000 of its 1.6 million members based right here, and while we wish they'd have a crack team of those members targeting folks like Brooklyn's Cruella DeVil, here are some of the big offenders.

• The Ringling Brothers circus is back in town in March 2008 and PETA is again questioning the way the circus treats its animals. The elephants parading through the Midtown Tunnel each year is especially disheartening and described as nothing more than a "PR stunt."

• NYU and Columbia both harbor a lot of scientific animal testing. TONY states that "Alka Chandna, Ph.D., a PETA senior researcher, even volunteers a couple of profs for particular censure: 'NYU's Lynne Kiorpes subjects infant and adult macaque monkeys to invasive procedures that impair the animals' vision,' she reports, 'and Columbia University's Raymond Stark studies the impact of morphine on the development of fetuses by pumping morphine into fetal baboons.'"

• The horse-drawn carriage companies are getting a lot of attention recently. The Coalition to Ban Horse-Drawn Carriages is backed by PETA and has been pressuring Mayor Bloomberg for nearly two years to get rid of the mostly tourist-funded horse-torture vehicles.

Who else is on the list? The cosmetics industry, Musicon venison farm, Parsons The New School for Design (sort of), and most likely you. Yes, you. The list finishes off with all New York dog owners and all New York meat eaters! Maybe their new racy GoVeg ad with Alicia Silverstone (or the E. Coli found in beef around town) will help convert the latter.