PETA Slams Katy Perry For Use Of Animals In "Roar" Video

There was a time when PETA was a big fan of Katy Perry (that time was basically when she was married to Russell Brand), but PETA will turn on you quicker than a hunter on a white-tailed deer, and slaughter you with shame for even the slightest thought of treating an animal inhumanely. Especially if you are a Big Name with a Hot New Album coming out and a Sexy New Video that's getting a lot of views. And so it goes...

Perry's new video for "Roar" unsurprisingly features animals, a few of which roar themselves... but the animals are real, not CGI. In it, Perry is not seen harming the animals, but rather living a peaceful existence with them in a fantastical jungle setting whilst showing off her large breasts—this is so perfect for PETA that you can hardly blame them for drumming up some controversy about it? And PETA is most likely correct in believing that there is some form of cruelty beneath a company that rents out animals for productions.

In their statement they note that: "Animals used for entertainment in film and television endure horrific cruelty and suffer from extreme confinement and violent training methods. They often become stressed and anxious when hauled around and forced into unfamiliar or frightening situations. The Serengeti Ranch, the animal exhibitor that we believe supplied the animals for the 'Roar' video, has been inspected by the US Department of Agriculture 22 times since 2001," receiving 13 citations. Below is their letter to the directors of the video, which you can watch here: 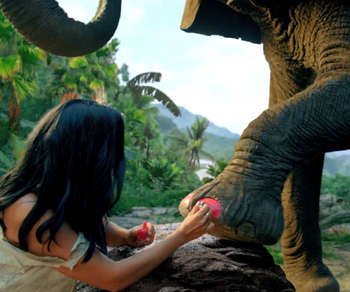 I am writing to you today on behalf of PETA regarding the use of wild animals in Katy Perry’s music video “Roar.” As you may know, PETA is the largest animal rights organization in the world, with more than 3 million members and supporters.
What you may not know—as most people do not—is that animals used for entertainment in film and television endure horrific cruelty and suffer from extreme confinement and violent training methods. Primates and elephants are intelligent, curious, and highly social animals with complex physical and psychological needs. These animals often become stressed and anxious when they are hauled around and forced into unfamiliar or frightening situations. Stage sets—with their bright lights, heavy equipment, and boisterous crowds—can be very traumatic for animals, even when every precaution is taken.

Serengeti Ranch, the animal exhibitor that we believe supplied the animals for the “Roar” video, has been inspected by the USDA 22 times since 2001, with a total of 13 citations during that time. The most recent five inspections have all resulted in citations, including failure to provide the elephants with adequate shade or access to a barn in 90-degree heat, inadequate fencing to protect elephants from public visibility and entry of unauthorized personnel, backyard area buildup of dog excreta near an enclosure, unprotected food items that pose a risk to the health of animals, inadequate shade for dogs housed in a former tiger enclosure, and the transferring of a tiger to another location without proper licensing or notification.

Primates who are used in film and television productions have been taken away from their mothers at an early age and are forced to perform in ways that are unnatural and sometimes painful. They are often isolated from other primates, and physical abuse is common during pre-production training, where no monitors are present. Similarly, most of the few elephants available for film and television productions in the United States were captured in the wild and separated from their families when they were just babies. Elephants in the wild travel up to 30 miles per day but in captivity are forced to live in cramped conditions and are trained by means of painful techniques that include the use of sharp metal bullhooks and electric prods against their sensitive skin. Off set, living conditions for these animals are typically deplorable. Even the best-known exhibitors are frequently cited by the U.S. Department of Agriculture for violating the federal Animal Welfare Act, which establishes only minimal guidelines for animal care.

Should a future project call for the use of animals, we hope that you will follow the lead of Rupert Wyatt, director of the highly successful film Rise of the Planet of the Apes, which featured wonderfully realistic computer-generated chimpanzees. Wyatt stated in interviews that he chose to use CGI apes for both moral and creative reasons. I invite you to watch PETA’s new public service announcement, narrated by Adrien Brody, which features the most realistic CGI chimpanzee yet created.

May we please meet briefly, at your convenience, to discuss this issue? We can do so in person or, if you prefer, over the phone. I look forward to hearing from you. Thank you very much for your time.

#animal cruelty
#katy perry
#peta
#roar
#Serengeti Ranch
Do you know the scoop? Comment below or Send us a Tip