It's got to be frustrating trying to walk your pet pig in Brooklyn—everyone's always stopping and pestering you for a photo and a litany of questions about what it's like owning a pig: Are they noisy? Do they smell? Is it awkward making bacon around it? But when you see a couple walking a miniature pig on a pink leash down Vanderbilt Avenue in Fort Greene, you stop to say hi. You know what sort of people don't stop to greet a pint-sized porker on a lovely Thursday morning? Sociopaths. John Wayne Gacy. John Ashcroft. HATERS. 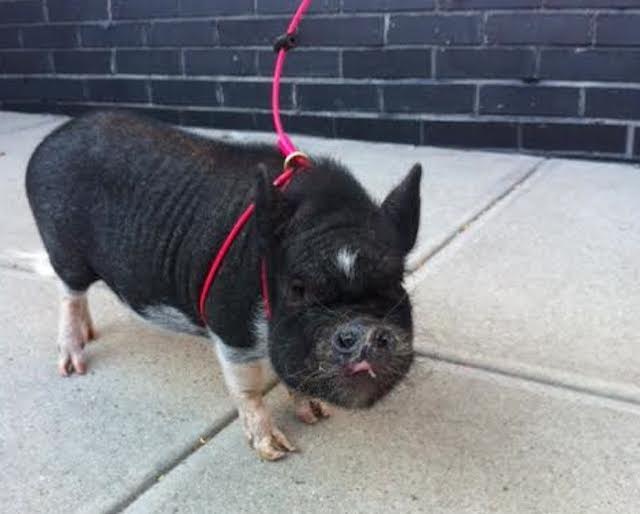 Pig ownership occupies a legal gray area in NYC—while they're categorized as livestock by city officials, many pet owners are unaware that keeping one is against the law, since miniature pigs are smaller than many dog breeds, and they're known for being clean, quiet and low maintenance. Last year, two Queens pig owners waged a battle against the Health Department in an effort to keep their porcine companions, after officials demanded the pets be "disposed of." (Mmmmm, pig disposal.)

State Senator Tony Avella has also jumped on the cause, and has introduced legislation that would place limits on the size of legal domestic pigs, as well as require them to be registered like any other pet.

Jen Campbell, who was walking her pig Kokomo this morning, said she's aware of the dubious legality of her pet, but said it's never been a problem among her neighbors, the most likely candidates to rat her out. And why should they? With the exception of a few adorable grunting noises, Kokomo is consistently quiet, in addition to being clean and exceptionally intelligent.

"We say she's between a dog and a cat," Campbell said, adding that while Koko has a litterbox and is generally independent, it's still important that someone regularly be home to walk her. She's also very clean, and smart: "You show her how to do something once and she'll remember," Campbell said.

So that settles it: Let's all go out and get pet pigs, you guys.

#fort greene
#pets
#pigs
#original
Do you know the scoop? Comment below or Send us a Tip