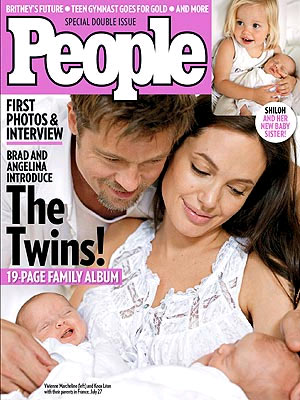 After teaming up with Hello! magazine to shell out $14 million for photographs of Knox Leon and Vivenne Marcheline Jolie-Pitt, aka Angelina Jolie and Brad Pitt's twins, People showed off the cover of their special double issue with the new additions to the Jolie-Pitt family tonight on their website. The issue will go on stands tomorrow (interesting, since People's latest issue was just went on sale Friday), and here's an excerpt from People:

"It is chaos, but we are managing it and having a wonderful time," Jolie tells PEOPLE of daily life at the Château Miraval in Provence, France, where the couple's four older children – Maddox, 6, Pax, 4, Zahara, 3, and Shiloh, 2 – have been enjoying a summer of outdoor play (hide-and-seek is a favorite) on the château's sprawling grounds.

Fortunately, they already have some household helpers. "[Shiloh] and Z pick out [the twins'] clothes and help change and hold them," says Jolie. "It's sweet – they are little mommies."

There's even a little picture of previous People cover baby Shiloh, now two-years-old, with her little sister. Since there's only the cover photo available, the People.com website has its own special Brangelina section.

Back in 2006, People had reportedly paid $4 million (donated to a charitable foundation Jolie and Pitt started) for baby pictures of Shiloh, and that issue sold 2.2 million copies, the most since a 9/11 issue which sold 4 million copies. It's unclear what share of the $14 million People paid, but the entire amount will once again be donated to charity. No matter whether it's profitable--it's about a brand promise to People readers. At least that's what People's publisher Paul Caine told the NY Times in May, "The consumer’s expectation is if the photos are going to be available, I’m going to see them in People. If we don’t get them, we miss that brand promise, we lose the halo that goes with that.”