On any normal weekday, NYC commuters are laser focused on getting through the subway system as fast as humanly possible. But there is one person whose presence can make even the most jaded straphangers willingly spend hours underground—and not jump from station to station.

The Broadway-Lafayette subway station in Manhattan was inundated with David Bowie fanatics this week after it was filled with photos of Bowie as part of a Spotify/Brooklyn Museum takeover to promote the fantastic career-spanning "David Bowie Is" exhibit (which runs at Brooklyn Museum through July 15th). But the biggest draw for the crowd has been a set of five limited edition Bowie MetroCards, featuring five iconic images of the singer including Ziggy Stardust, Aladdin Sane, The Thin White Duke, young Bowie and The Clown from the "Ashes To Ashes" video. 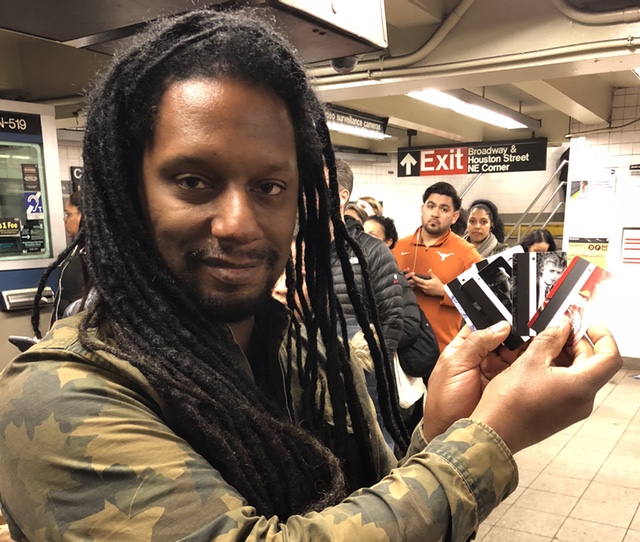 "I'm sentimental for all things New York, and this is so NY," explained a Bowie fan named Martin Martin, who used up his lunch break on Thursday standing on line. "I adore things like this, and I adore Bowie. 'Life On Mars' can make you cry." Xiomara Gonzalez came down on Wednesday for the cards, but returned on Thursday in order to get some for her twin sister. She also said she couldn't resist the call of Bowie: "I got into him during the Earthling period. I used to have dreams about him, it's true, where we would go to Tower Records together and go record shopping."

The MTA printed 250,000 cards, distributing them at the Broadway-Lafayette & Bleecker Street stations starting Tuesday. They were dispensed at station booths and MetroCard vending machines, with the machines being restocked in groups of 5,000 until supplies run out.

As with similar runs of exclusive MetroCards featuring the likes of Twin Peaks, Supreme and Barbara Kruger, demand has been running high. There were long, winding lines poking out of the station and up the stairs to the street at various points over the course of Wednesday and Thursday; several people told Gothamist they waited over two hours to get a piece of MetroBowie. 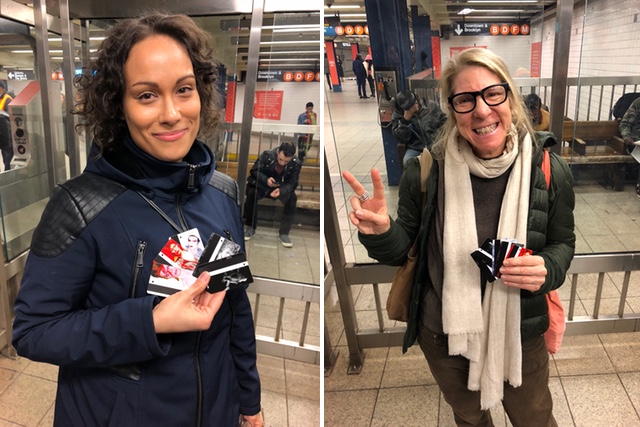 "I was on line for three hours on Wednesday and I got one card, but the machine was screwing up," said Chris Cush, a real estate salesperson and member of the band Headless Horseman. He returned on Thursday to get more cards, and bring his colleague who also wanted some. "Ziggy Stardust literally changed my life when it came out. I was 12 years old, and that was the album that made me want to play music," he added.

NYC Transit worker True Jones told us she had seen a few fights almost break out as people got heated while waiting. She said the biggest problem was people who got to the vending machines and decided to buy multiple cards, holding up the line. "I've been asking people to be courteous and not slow down the line," she said. Right on cue, a man at the front accused the person behind him of "verbally assaulting me" and stormed off. For people who weren't interested in the Bowie cards, Jones took pity and let them pass into the subway rather than wait it out. "I can't wait until they're all gone," she said while laughing.

Gregory Klaeboe, who runs a tourist tour group See Central Park NYC, came down on Wednesday to buy cards for a friend in Oklahoma. He ended up buying around 20 of them in an attempt to get multiple sets of all five collectibles. Besides the cards he sent his friend, he's put the rest of them on eBay. 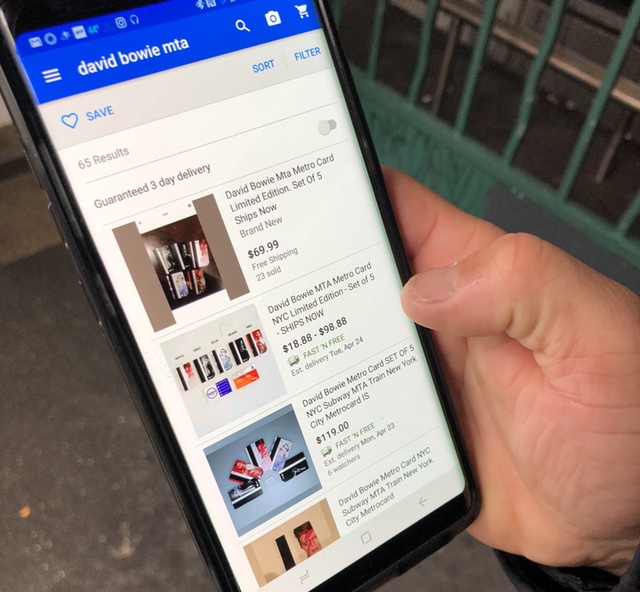 Many are selling the cards on eBay. (Ben Yakas/Gothamist)

"I just did it as a favor for a friend, it's not like I did any harm—all I did was I sat here for two hours!" he said. "I don't see anything wrong with the hustle. If I could do this everyday, I would." As of early Thursday afternoon, his cards were up to $71 for a full set; he pointed out that there were lots of other people selling the sets on eBay for over $100.

The MTA workers dissuaded people from reselling them in the station, though one customer was seen trying to sell the $6.50 card (the minimum for buying a new card) for $10 immediately after purchasing it.

"People are huddled in corners like 10-year-old boys trading MetroCards," said NYC Transit worker Russell Henry. The 31-year veteran of the MTA said that while there were a few grumpy people here and there, overall the event had brought out the sweetness in commuters, something he credited to Bowie: "It's the camaraderie of David Bowie and all his life and everything he's meant to everyone." When asked if he grabbed any of the cards for himself, he stepped back and smiled: "What do you think?"

This was previously published on the Gothamist newsletter on April 19, 2018. Don't miss stories—sign up for our newsletter here.

#bowie
#david bowie
#metrocards
#MTA
#trains
#original
Do you know the scoop? Comment below or Send us a Tip