Pencil This In: New Year's Eve in NYC Edition 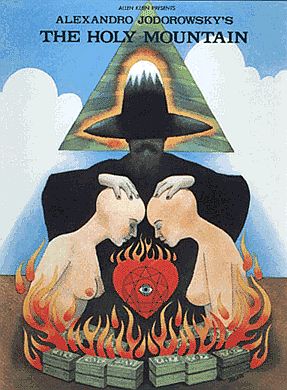 MOVIES: A lavishly restored print of Chilean director Alejandro Jodorowsky’s visionary film The Holy Mountain has been making the rounds this year; it’s back again this weekend at IFC Center for a pair of midnight screenings. First released in 1973, The Holy Mountain has grown into a cult classic for its surreal, psychedelic imagery and a serpentine, metaphysical storyline, which takes as inspiration, among other things, "The Ascent of Mt. Carmel" by St. John of the Cross and the idea of a mountain uniting heaven and earth.

MUSIC: Instrumental psychedelic metal band Hightower say they sound “like children playing” on their Myspace page, but the San Franciscans’ “influences” really tell you what you need to know: “skateboarding, boozenweed and swimmin holes.” To that we’d also add Primus, Pantera and a dash of Yes. Make your own facile comparisons after checking them out at Cake Shop. With Demmassek and Easter.

THEATER: Humorist David Ives has chosen some uncharacteristically meaty source material for his new play New Jerusalem, which begins performances tonight at the Classic Stage Company. The play concerns 17th century philosopher Baruch de Spinoza’s “cherem”, or excommunication, from the Dutch Jewish community in 1656. Spinoza had been voicing some unorthodox interpretations on the Talmud, so – after an interrogation that is the focus of New Jerusalem – he was, in Bertrand Russell's words, “cursed with all the curses in Deuteronomy and with the curse that Elisha pronounced on the children who, in consequence, were torn to pieces by the she-bears” Heavy stuff, but Ives’s plays are typically droll and absurd, so expect some levity.

THEATER: Still in previews, David Mamet’s new Broadway play November stars Nathan Lane as President Charles Smith and Laurie Metcalf as presidential speech writer Clarice Bernstein. Topics parried in the satire include “civil marriages, gambling casinos, lesbians, American Indians, presidential libraries, questionable pardons and campaign contributions.” The Village Voice’s Michael Musto visited the cast on the first day of rehearsal and got Metcalf to spill some beans; apparently her character is lesbian and, in exchange for helping the President get back on top, she demands the right to marry her partner. Dylan Baker is also in the cast; Joe Mantello directs.

COMEDY: Today's Times profile of Chris Rock depicts the comedian primed to kill Madison Square Garden on New Year’s Eve with two hours worth of fresh material, developed over the past nine months at New Jersey comedy clubs. Now we kind of wish we hadn’t read the article, because we’re seriously tempted to brave the post-midnight Times Square stampede to catch this gig. Oddly, there were no tickets available when we searched directly through Ticketmaster, but after navigating through Chris Rock’s website to Madison Square Garden’s TM interface, we secured great 100 level seats – $129.50 plus convenience charges – which we now have just seconds left to purchase. If we balk at the price tag, they're all yours. 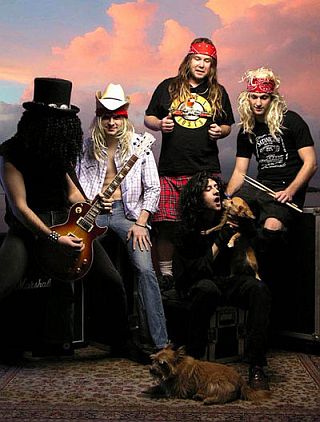 MUSIC: There's one surefire way to ensure a rockin' New Year's Eve, and it isn't with Dick Clark. The Music Hall of Williamsburg hosts Mr. Brownstone (pictured), the drunkest Guns n' Roses cover band, who tell us what concertgoers can expect:

On top of all that, they tell us you'll hear all of your favorite songs by the popular rock group Guns n' Roses and enjoy drink specials while interacting with the friendly and spirited staff at the Music Hall of Williamsburg. They also warn you may make some "serious mistakes". – Jen Carlson

YOGA: Start 2008 with some"SERENITY NOW" at Jivamukti Yoga School’s silent New Year’s Eve Celebration. They’re opening their doors for free to “provide a yogic place of refuge for all. Mauna, the yogic practice of silence (they didn’t say no Blackberry!) will be observed from 9:00pm -12:00am.” At midnight, silence will be broken with chanting and the evening will conclude with an ecstatic Kirtan lead by the band Lokah. Vegan Chai and assorted vegan snacks will be served. You’ll wake up clear headed on Tuesday morning, with a well-preserved wallet and, best of all, an irrepressible sense of superiority.

BURLESQUE: This time next year the good old Galapagos Art Space on North Six in Williamsburg will be a thing of the past; the performance nightclub is relocating to a new “green” space in DUMBO. (Their Billyburg rent recently increased $10,000 a month.) So they’re going out with a bang this New Year’s Eve: “24 Hour Liquor License = NON STOP PARTY!” And since they’re actually not going to close until Wednesday morning, you could totally stay there and not see daylight for almost two full days. The marathon festivities here revolve around bawdy burlesque, brought by an army of artists like “Nasty Canasta”, “Jonnie Porkpie” and DJ Boyracer, who spins “rawk, electro, glam, disco, indie, and party jams all night & morning long!”