Hello, we have decided to give our readers GothamList events for the entire week. You can check them out below (picks include a celebration of Fear and Loathing in Las Vegas's 40th anniversary, the St. Patrick's Day Parade, a searing documentary about gritty 1990s NYC and more) but you can also get listings a day earlier by signing up for the Gothamist Daily newsletter—sign up here.

TRIANGLE SHIRTWAIST FACTORY POP-UP EXHIBIT: A fire at a Greenwich Village factory in 1911 killed 146 garment workers, and 100 years later it remains New York City's worst industrial distaster. To commemorate the tragedy's centennial and raise awareness for the labor rights safety issues that still exist today, the Brooklyn Historical Society is hosting a pop-up exhibit of the "community contributed personal stories, pictures, documents and objects" collected by the Triangle Fire Open Archive. Visitors with their own Triangle Factory memorabilia are encouraged share it at the exhibit, where it will be photographed and digitally archived. Next Wednesday, the museum will host a free multimedia presentation about the Triangle Factory Fire. 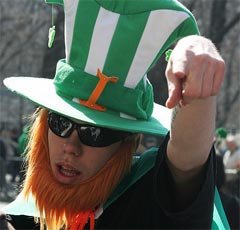 ERIN GO BRAGH: It is St. Patrick's month and this is the big parade, the 250th St. Patrick's Day Parade. The Grand Marshal is bestselling mystery novelist Mary Higgins Clark. The parade is shorter this year, stopping at East 79th Street instead of East 86th Street.

NEVER NEVERLAND: After the death of Michael Jackson, photographer Henry Luetwyler set out to photograph the objects from Jackson's estate that were to be included in an auction in April 2009. That auction never happened, and Luetwyler's photos remain as the only documentation of these collected objects, which range from the performer's sequined gloves, shoes, and sundry nick-nacks that only a lifetime of being Michael Jackson can accumulate. Luetwyler will lead a discussion of his work at Foley Gallery on Thursday, where his photos are on display until April 2nd.

UNDER THE SEA: Disney fans and booze hounds alike should flip their fins and swim over to the Bell House this Thursday for The Little Mermaid Sing-Along. Secret Formula has subtitled all the songs from the movie so fans can be a part of Ariel's world for the evening. Themed drink specials and sea snacks will accompany a screening of the movie along with a trivia game to win prizes. Arrive early for a Disney medley pre-show of clips, songs and cheesy PSAs.

BEER AND CHEESE: The increasingly complex and delicious beers now available can be wonderfully paired with cheese, and this 92nd St. Y program, Better Than Wine: Beer and Cheese Pairing aims to show you how you can do so.

CATHERINE DENEUVE VIA TRUFFAUT : Catherine Deneuve makes Jean-Paul Belmonodo forget his skepticism about whether she truly is the mail-order bride he's been writing to in 1969 noir, Mississippi Mermaid, by Francois Truffaut. It's part of BAM's monthlong tribute to the iconic French actress.

JEFF BUCKLEY TRIBUTE: Regarded as the patron saint of the East Village live-music scene in the 90s, Jeff Buckley released but one studio album before his untimely death. The Knitting Factory is bringing together a number of musicians to perform Buckley's modest but moving catalog of songs in a tribute event curated by Haydée Milanés and Gary Lucas. All proceeds of the show will go to Road Recovery, which uses concert events and music training to help youths fight substance addiction.

LAUGHING AT ART: For anyone who has ever visited a respectable art museum and wished they could laugh out loud after seeing some of the artwork will finally get their chance. Saturday Sessions at PS1 is an experimental program based in collaboration, and this week's program is mixed comedy performance hosted by Miriam Katz and is "featuring live performances by Jon Glaser, Dave Hill, Jenny Slate, and Reggie Watts, as well as newly commissioned videos by Maeve Higgins and Rory Scovel."

MS. JACKSON: The world famous performer--and youngest member of the Jackson family--Janet Jackson will be signing copies of her new book, True You: A Journey to Finding and Loving Yourself, which details her lifelong struggle with self-image and self-esteem.

LISA LOEB: "You say, I only hear what I want to..." became stuck in everyone head in 1994, especially those who fell in love with the cute, indie girl singer with hipster (before they were even hipster!) glasses in a music video directed by her neighbor, Ethan Hawke. Since then, Lisa Loeb has been writing songs and singing them--as well as making forays into TV. She will be performing as part of City Winery's "Divinale: A Month of Women, Wine and Song." And did you know there are Lisa Loeb eyeglasses for sale?

TO THE BIRDS: Check out Inwood Hill Park's "bird alley" with the Urban Park Rangers during this early morning birding walk and look for black-capped chickadees, northern cardinals, and downy woodpeckers.

DECADENT GEMS: The Cooper-Hewitt looks at the role of jeweler Van Cleef & Arpels in style and innovation with the exhibition, "Set in Style." Over 300 works, including jewels and objets d'arts, are on display.

BEE BOOK READING: Lela Nargi's children's book, The HoneyBee Man, is about to become tale of the days of yore, considering that the world's bee population is rapidly dying off. So bring your kids to hear her read from the book this Sunday while it's still a reality! Nargi will be around to sign copies, and an apiarist (beekeeper) will be present to answer questions about beekeeping (just make sure to leave some room for your kid to ask some after you're done).

TRUE CRIME NEW YORK: Former mayor David Dinkins will introduce this 2000 documentary by Marc Singer, Dark Days, at the Maysles Cinema. The film tackles the subject of the homeless people living in the "Freedom Tunnel." Singer and the Coalition for the Homeless's Brosnahan will also be on hand. Roger Ebert praised the film, " It is a film about people who have fallen through the cracks, but still share most of the same ambitions and hopes as the rest of us... Dark Days is the portrait of men and a few women who stubbornly try to maintain some dignity in the face of personal disaster."