The New York City subway system is for the most part a tube-based Hell that no one seems to want to take responsibility for. Sometimes, however, the subway can suddenly transform into a realm of magic and wonder, which happened today when a man strode on to a train carrying a peacock. Straphanger Matthew Chayes snapped a picture of him just kind of standing there as if to say, "Yes I am on the subway with a peacock." 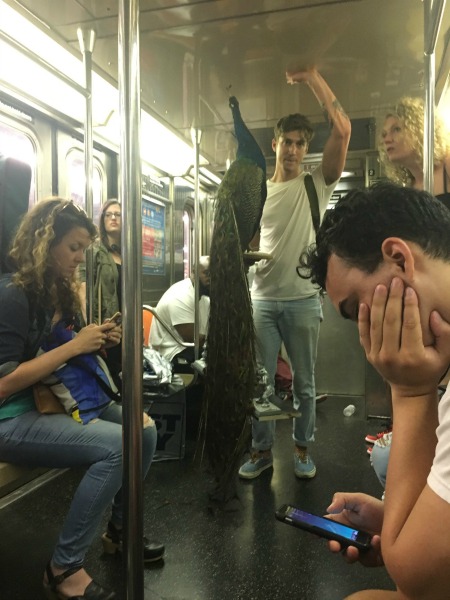 What's a peacock doing on the subway, you might be asking (unless you're one of the thoroughly unimpressed people seen in this photo). Well, from the looks of it, just trying to get somewhere, just like you. According to Wikipedia, peacocks escape predators by running through the undergrowth of forests. Here in our urban jungle, one can safely assume this is a bird on the run, trying to start a new life here in the Peacock Protection Program. The human who doubles as his mobile throne is probably just like, the bird's assistant.

What's it running from though? Gambling debts maybe, or a drug deal gone wrong. On a more metaphoric level, the peacock could also be running from a broken relationship, though who knows whose fault it really was that it all went to shit. Or it could be one of those things where the peacock is running because it's scared of what it really wants. Hey bird, don't worry, we've all been there.

It's real easy to get all cavalier about how you don't have feelings or how they're a total joke, and for whatever reason the people who got here first and decided what being cool was have passed down the idea that suppressing your feelings should be rewarded. I don't know though, I think it might be better to live with a little more openness and earnestness and a few less people with "Fluent in sarcasm" in their Tinder and Twitter bios. That mostly means you're fluent in "being an asshole." Although living like that is easier said than done.

So don't run from your feelings, Subway Peacock. Make your assistant turn around and take you back to whatever tough emotional mountain you didn't want to climb and go conquer that thing. If it's drugs though, uh, keep running.

#peacocks
#subway
#ya man a bird
Do you know the scoop? Comment below or Send us a Tip