It feels like just yesterday the nation was gripped by the musical version of the Election of 1800 instead of our current trashfire nightmare. But even though the Hamilton mania's died down a bit, now that much of original cast has departed, you're still about as likely to get tickets as you are to hear a rap number from Hamilton's own ghost. Still, for folks desperate to get even a glimpse of the musical in action—or for history buffs who want to learn more about the dude on the $10 bill—the PBS documentary Hamilton's America, which premieres tonight, is worth a look.

Hamilton's America is not a great documentary, but for fans of Hamilton (and boy, are there a lot of those), it's an intimate look at the show's creation. The film is directed by Alex Horwitz, who was Hamilton creator Lin-Manuel Miranda's former roommate at Wesleyan University. The two have stayed close since, which got Horwitz—and, by extension, the Hamilton's America viewers—a true behind-the-scenes look at how Miranda pulled the whole thing together. One early scene shows Miranda writing "My Shot" in Aaron Burr's former bedroom at the Morris-Jumel Mansion in Washington Heights. In another, an exhausted Miranda pours himself a gin-and-tonic in his kitchen as he talks about balancing his two-week-old son and rushing to finish the musical just a few weeks before it went into tech rehearsals at The Public Theater. 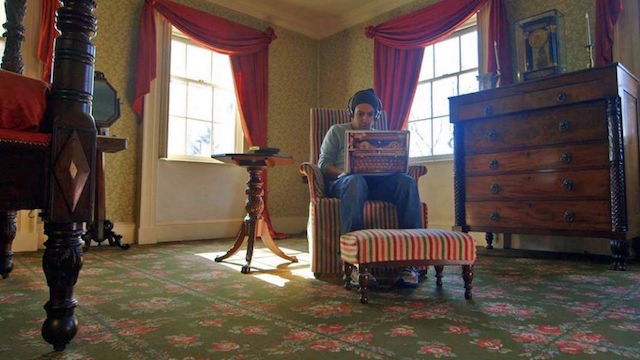 These moments, as well as the energetic snippets of numbers like "Burn," "My Shot," and "Yorktown (The World Turned Upside Down)" are the best parts of the documentary specifically related to the musical—for the most part, watching Miranda stress out over finishing the show isn't all that interesting, since we're all too familiar with what happened next, but it's fun to see some of Miranda's quieter moments before his star rose to near ubiquity.

Even better than the making-of-Hamilton stuff, though, is the, well, actual Hamilton stuff. The documentary takes viewers on a walk through Hamilton's life, starting with his turbulent childhood in the Caribbean. We learn about his friendships with key Revolutionary figures like the Marquis de Lafayette and John Laurens (in the musical they all meet for the first time at a tavern, though it didn't really happen that way).

The musical is also peppered with interviews about Hamilton's impact on the United States and its financial system, with interviewees including Presidents Obama and George W. Bush, Senator Elizabeth Warren and, regrettably, Paul Ryan, but that last one's a rant for another day.

And there's a lot of New York in this documentary, which reminds you of how integral this city was when it came to this country's founding. We travel to Revolutionary military camps in Brooklyn, visit Hamilton's home in Hamilton Heights, visit the aforementioned Morris-Jumel Mansion and peruse his old letters with Aaron Burr at the Museum of American Finance on Wall Street. Even shots of street signs with familiar hames—Mercer Street, Lafayette Avenue, Fort Washington Ave—remind the viewer that Hamilton is a tangible New York story as much as an American one.

Costumed actors might sing about how revolution gripped New York, but once upon a time these people were real—they lived in Washington Heights, protested in City Hall Park, practiced law in Lower Manhattan and eventually got fatally shot on a patch of grass in Weehawken. History is happening in Manhattan and we just happen to be in the greatest city in the world (in the greatest city in the world). Don't you forget it.

#hamilton
#hamilton's america
#original
Do you know the scoop? Comment below or Send us a Tip