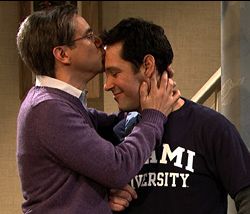 If Saturday Night Live couldn't find a way to live up to their promise "to have Michael Phelps shirtless in every sketch" earlier this year, it seemed a little more likely that they could get us some Shirts-Off Time with good sport Paul Rudd hosting last night. They went even further than that in the digital short that featured Rudd in the buff being painted by Andy Samberg.

But who would have known that Rudd's good looks would have been enough to give most of the episode an undercurrent of bro-on-bro action? Whether it was a family dinner scene that may have broke the record for males kissing in an SNL sketch, rolling out newcomer Bobby Moynihan as Snagglepuss on Weekend Update or just a punchline involving a cellphone vibrating while inside Rudd's behind, there was definitely something in the air last night.

As icing on an already pink cake, Update ended with a surprise appearance from Justin Timberlake, who made up for having to cancel on hosting next week by once again lighting up the show and performing a whole episode in two minutes, culminating with him performing "SexyBack" atop the Update desk. With the expected post-election lull following such a talked about season of SNL, Timerblake's appearance reminded you that political impressions aren't the only way to breathe life into a thirty-four year old institution.

Some questions about last night's show: did the first cold opener after the election feature Joe Biden and not Obama because the show's considering a new impressionist for the president-elect? Is next week's hosting/musical combination of Tim McGraw and Ludacris the starkest contrast between two guests since Steve Forbes and Rage Against the Machine? And where were the new ladies at? After the jump is the digital short, Snagglepuss and since we'll never know how magical Dick in a Turkey would have been, here's the classic Dick in a Box.