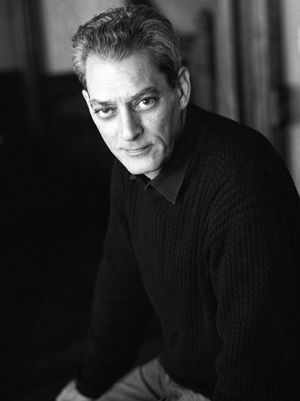 During the nearly thirty years he's lived in Brooklyn, Paul Auster has become one of the most respected novelists writing in America today. He's published over twenty books, including The New York Trilogy and The Brooklyn Follies as well as written and co-directed the films Smoke and Blue in the Face. His latest novel, Man in the Dark, deals with a retired book critic who battles his chronic insomnia by imagining a parallel universe where America is entangled in the midst of a civil war. We talked to Auster about the uncivil political war going on in the country right now, how the rest of the country sees our city as well as what his relationship is like with his previous characters. Tonight he'll be speaking at the NYPL (details).

What has it been like watching all of the changes take place in Brooklyn throughout the long time you've lived there? I’ve been in Brooklyn now for more than 28 years, almost 29, and it’s changed dramatically, of course, but not as extensively as everyone thinks. It’s still a very mixed place, a heterogeneous place, all sorts of people floating through the neighborhoods. It’s unusual, for example, when you go to a restaurant in Manhattan for dinner to see anything but white, upper middle class people. In Brooklyn, everywhere there’s everybody. This is what attracts me to the place.

Sometimes it feels as if no one who's around you in Manhattan actually lives there, let alone is from there. Manhattan’s always been a magnet for people from all over the country and all over the world in fact--Brooklyn a lot less so. It has exploded, no question about it. One building after another, you see rescued from oblivion, renovated and becoming inhabitable. It’s really kind of a miracle what’s happened there over the last, say, 30-35 years. Back in the 50s, Brooklyn was a dead and dangerous place. And it’s come back.

Have you been affected by news of David Foster Wallace's death? I only heard this news yesterday. It came as a tremendous shock to me. It’s so sad, terrible. We met once or twice. I had admiration for him. I feel so sorry for what seems like intense suffering for a long time. And to end your life so young, it’s tragic.

It was a chaotic week. It seemed that every day something cataclysmic was happening. We seem to be falling rapidly and crisis is spreading. Let’s hope it doesn’t get too terrible cause so many people are gonna suffer, already are suffering.

I can't recall such a dramatic turn of events so close to a major election. I can’t either and I’ve been around a lot longer than you.

If there was one thing you could change about New York, what would it be? I have this secret desire that one day New York City would secede from the United States and become an independent republic. It's mentioned in Man in the Dark. But I’ve thought about this at some length and I think it would be a wonderful thing for the city. Because the fact is we who live in New York love it so much and that’s why we stay. But the rest of the country doesn’t have much interest in New York City. They think of New York as an island off the coast of Europe rather than part of America.

You travel around the country and people talk to you like you've lived in another world. Yeah, another world and they think you’re living in some kind of hell, a godless hell.

Right, and there only seems to be a growing dichotomy between the values of people here and elsewhere in the country. Well we’re a very divided country and it seems to be split right down the middle. It’s not as if it’s 55-45. It’s 50-50. And as the rhetorical climate has gotten uglier and uglier over the years, the two sides have gotten unable to talk to each other. We don’t listen. It’s become deeply frustrating to be an American right now, to look at all the problems we have and not be able to discuss them frankly. Because basically the side that I don’t belong to just seems to want to ignore the problems, attack the other side and make fun of them. People who are Democrats, liberals, are unable to announce the fact that they are liberals. Which, to me, is shocking. Because liberalism is what the whole country was founded on. The founding fathers were liberals: secular, sophisticated, elitist liberals.

They created the country and the ideas we’re founded on. And every good thing that we’ve produced since has been the work of the liberal imagination. Everything from Social Security to Medicare to civil rights action and so on. And I think the liberals in the United States should be prouder of their accomplishments and stand up and defend them more vigorously.

The narrative in Man in the Dark spawns from August Brill, its protagonist coming up with a story in order to combat insomnia. What do you think insomnia brings us closer to that isn't there during the rest of our waking life? The idea of lying awake in bed in the darkness unable to sleep, somehow you’re thrust into your memories, your fears. It’s usually a difficult time. People who can’t sleep are usually not enjoying the fact that they cannot sleep. So it creates a kind of agitation in you also: sadness, anger, regret. I think people who can’t sleep torture themselves most of the time throughout the night.

Are you someone who writes as a way of coping with insomnia? I myself don’t suffer from that kind of insomnia. Sometimes I find it difficult to go to bed and I stay up longer than I should, either reading or watching a film. But once my head hits the pillow, I usually fall asleep pretty quickly. There have been nights, yes, when I have been unable to sleep. We all go through that. What I generally do is get out of bed and go do something. Whereas Brill is unable to do that because his leg is damaged and he’s confined to the bed. Being stuck there he has to think of other solutions to overcome this problem. The one he’s hit upon is making up stories.

Watching an old movie can help. Picking up a dull book can help. Cause if you read a very absorbing book, it can keep you awake. But say, like, The Principles of Chemistry, it might help you sleep.

Do you see novels as a means to discover empathy for other people? What novels do is create world that don’t exist in the physical world, but only in the imagination of the writer in which we, as readers, get to live inside the thoughts and actions of people we don’t know, people who are not us and people who are often nothing like us. And I think the experience of living imaginatively inside somebody else increases our compassion and understanding of the world and other people.

And do you experience the same things in the process of writing them, of inhabiting those characters? I suppose so. I never thought about it in those terms exactly. You are reaching out to others. You are giving yourself up to that and in some sense, merging with them. You’re constantly leaving yourself. The way I feel about the characters I invent—invent is almost the wrong word—the characters who appear within me. They’re fully formed human beings. I feel a tremendous attachment to them. They live on. After books are finished, I rarely think about them very much. But I do think about the characters. And they stay with me as if they’re people I know, as if they’re flesh and blood human beings.

Which one would you say that you have the strongest relationship with? There are several. In Travels with the Scriptorium, I brought back a lot of my old characters from earlier novels. There’s Anna Blume from In the Country of Last Things, Daniel Quinn from City of Glass. I suppose some of the characters from the earliest books I wrote, who have been with me the longest. They are inner comrades and they’ve walked along with me for all these years.

Do you know going into writing a book if a previous character might make an appearance in this story? There’s always the possibility! It’s happened that a minor character in one book has become a major character in another. The example that jumps out to me right away is The Book of Illusions, Zimmer was a small character in Moon Palace, a friend of Fogg's, the protagonist. Years later I wrote a book in which he became the main character although he changed physically. In the earlier book, I described him as rather short and then as the years went on, he got taller. Physically he changed, but I think the inner life of this man remained the same.

You've told so many "only in New York" stories throughout your career. Are there any more recent ones that come to mind? Well, down the street from me--we live in a brownstone, my wife and I. There’s an apartment building a few doors down in which the entire world lives--everywhere. And there’s a man from I imagine India. He walks around in white robes, he has a long beard, he wears sandals. He’s obviously a religious man. And every time I see him, he bows to me and I bow to him. We’ve never exchanged a word. There’s just this kind of a mutual understanding. And I think that’s something I love about living in Brooklyn and in New York, these kinds of connections between strangers.