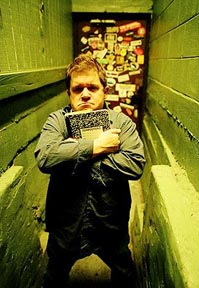 The Comedians of Comedy are performing at Irving Plaze on October 27th at 6 and 10:30 PM. Both shows will be hosted by Patton Oswalt, who will be joined by Brian Poshein, Maria Bamford, Eugene Mirman, John Mulaney, and some yet to be announced special guests. Last year's surprises included performances by David Cross, Nick Swardson, Jon Benjamin, and Jon Glaser. With such a line up, the event is certainly a night not to be missed. Gothamist got a hold of Patton to get his opinion on some of his past roles, politics, and where he likes to eat when he's in town.

What do you think it will take to get America's youth interested in the upcoming presidential election?
Mickey Rourke throwing his hat into the ring.

Activist groups, such as the Yes Men and Billionaires for Bush, use humor as a means of creating awareness of social issues; satirists use their wits as a means of skewering the politics of the times; but why is it that politicians seem to be generally unable to take advantage of the medium of comedy?
The first casualty of the will to power is self-effacing humor.

Has a joke or a piece of comedy ever moved to you make any important decisions?
I now no longer throw butter or clocks out of windows. I would never fuck with reality or matter that way.

In past interviews, you've mentioned how frustrating doing punch-up on films can be. What do you find most satisfying about it, aside from the money?
The varied and delicious selection of bagels and herb teas.

Do you have any interest in independently producing any of the films that you've written?
If they could be produced with the money I'd get from selling my pornography and thimble collections on eBay, yes.

At your level of fame, do you still find yourself having to deal with the occasional heckler or bachelorette party at a show? Have your methods of combating such interruptions changed at all?
My fame is such that none dare meet my gaze, nor disturb the air with laughter in my presence.

On several occasions, you've spoken of your love of fine dining. What are some of your favorite places to eat in the city?
Veritas, Les Halles, Per Se.

What is your strangest "Only In New York" moment?
Getting drunk with a Chinese dwarf in Chinatown. He held a staff.

Given the opportunity, how would you change New York?
I would have me living there.

Which New Yorker do you admire most?
Three-way tie: The Baseball Furies, the Warriors, and Cyrus.

What do you consider the perfect day of recreation in the city?
An endless walk in the autumn.