Patton Oswalt has built himself up as one of the most well-respected stand-ups in his twenty-plus year career. He is a definitive "comic's comic," always refining and plugging away at his stand-up act—his most recent special being played on Comedy Central. Today marks the opening of his first star turn as the lead role in the darkly comic Big Fan, written and directed by the same screenwriter who wrote The Wrestler. Oswalt carries the film through it's brooding, modernist character study of a Staten Island Giant fanatic who lives with his mother and spends his work days perfecting his night speeches made as a caller to a local sports talk radio show. The film will be a strange experience for Giant fans as the tale it tells inadvertently ended up mirroring the team's Plaxico Burress situation last season in a bizarre number of ways.

Patton checked in to talk with us about what his first time in a strip club was like, which stand-up comedian is like The Beatles of comedy and how the outer boroughs might have the ethnic flair, but it's the center of the city that contains the most priceless flare-ups.

How was how was filming Big Fan on Staten Island? Did you have any favorite spots? Yeah, we went to this place, Bellavita Restaurant, and that pizza was so, so yummy. It was amazing. And then there was Hylan Boulevard, there's something about that street.

Was this your first extended experience in the outer boroughs? Did you feel like you were getting a flavor of NY that a lot of people don't experience? Yes, that was indeed my very first experience in the outer boroughs, man. It's provincial without being small minded. It has that feeling that there's an actual very, very specific culture back there. I can't really describe it—very working class, but also...very ethnic in a cool way. Oh boy, I'm not really making much sense. I can't quite describe it.

It's strange because all the media comes out of the people who don't experience that for the most part. Yeah, I mean, New York is such a melting pot. But a place like Staten Island is its own thing, for better or for worse. But like I said, I know this sounds weird, all the food I had out there was really, really delicious. Because it feels like this is a culture.

Yeah, there's some tradition to it. It was taught by someone who made it before. It wasn't just... Exactly yeah, like it was passed down.

I'm really curious, at what point did the Plaxico Burress situation become this parallel to the movie, It's really crazy to watch it... I think it happened right after we were done wrapping; someone sent us the story saying, "Hey did you see what just went down?" And we were all cracking up. I think it happened just as we wrapped. But I'm not sure of the specific timeline.

It's just strange especially all the radio clips like the ones you're listening to after the games that actually happened last year. You could just switch the variables for what happens in your movie and its eerily similar. It is eerily similar. Indeed it is.

Can you tell me what your first experience was in a strip club was like? Or the strangest experience you ever had in one? I think my first... I think I was just out of high school. And I was with some friends of mine, one of whom was going away soon, so we went to some strip clubs in DC. I just remember they were really kind of garish and messed up. And I didn't like them. It kept giving me the creeps. I don't really have a strange experience because strip clubs have always been really depressing for me. It would be uplifting if it got to strange, but it never got beyond the, "Oh god this is sad."

I don't know what the oddsmakers would put that you and Zach (Galifinakis) would have prominent strip club scenes or movies in the course of 3 months. [laughs] Or maybe its not a surprise at all.

[laughs] Yeah, we always knew about those two. that's how we pictured them. We knew that's how they'd break through.

In the strip club scene, I noticed that one of the other actors, one of the guys in the football player's posse, had the same name as me—Billy Parker... I didn't know if you'd remember. I don't remember a Billy Parker....

Well that's too bad. Did you ever have that moment like the one your character does in the movie where you walked into a fancy bar to find out that beers are charged $9 in certain places, and it kind of blows your mind? I'm sure that I have, but I can't remember. Because if I'm in a bar, then as long as there's scotch, I'm happy.

There's already a lot of talk about how dark your performance is in this movie, especially for a comedian. Have you ever found yourself getting so dark in your stand-up that afterward, you felt like you were unsuccessful and had to pull yourself back? No, never in my stand-up. In my stand-up, I've always been, even when I covered dark subjects, I just have so much fun personally doing stand-up. There's always fun in it, to me at least. I'm never up there going, "Okay, it's time to get real, people." Like I never understood that whole, sit down on the stool and think things out. It's like "Whaaat, what are you, lecturing now?" You know what I mean?

What stand-ups do you find to really get dark and pull it off without any concert about whether the audience is going with them? I'm just into stand-ups who are funny no matter what. To me, it's like, that's my only genre that I have left. It used to be, when i was young, "yeahh darkerrr," but now that I'm older, it's whatever suits me. I currently worship Louis CK, who I think is the darkest, most raw motherfucker out there. And then someone like Brian Regan, who is squeaky clean and I laugh just as hard because it's all brilliant. Then you have people like Dave Attell, who it seems light when you first look at it. Dave Attell reminds me of early Beatles music, where it sounds like simple catchy pop. And then you really look at it, and you go, "Wow, that's complex and difficult. It seems like he's just telling dirty jokes but then there's so much underneath them". I just love the smuggling aspect to it. My only genre now is just what is funny. And that just cuts across absolutely everything for me.

I hope Dave Attell doesn't discover psychedelics. But maybe he will. When he goes to India, man. 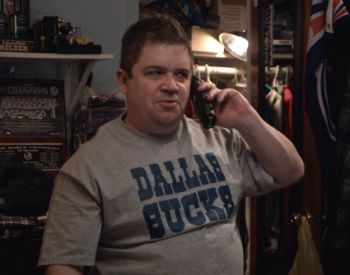 Did you listen to sports talk radio or its callers at all in prep for this? No, I didn't listen to any of that because I'm not into sports at all. I basically listened to stuff like Art Bell and Tom Scharpling and they have quite a cast of callers who chime in and you get that weirdness that I love.

Have you ever had an experience with a fan crossing over the way your character does, trying to invade that line in a very personal way? I had a couple minor incidents but nothing that profound. I think I'm lucky that I'm so self-deprecating and personal that I don't think people look at me as an object of worship. I've had a couple of little sketchy moments, but nothing like what Paul does in this movie... I like doing my stand-up, and I like acting in movies. But i like living my quiet life, just reading. I don't want, and I've seen, especially in other friends, what that real crazy fandom looks like and it just grows...and it makes me tired just to look at it.

Do you have any favorite "only in New York" experiences? One time I saw, this is before the election last year, and I'm in a cab, and it's a guy from the Middle-East who is driving me. We are going through a light and there's a black guy who has stopped in the crosswalk, like defiantly. Like, he's crossing against the walk signal and he's just standing there. Everyone's just honking and the guy will not move. The cab driver rolled his window down and he starts going, "This is why Obama is going to lose, it's your fault!" And then the black guy starts yelling, "9/11 motherfucka! 9/11!" Wow, this is the entire 2008 election encapsulated right here. It was like the entiiire election right here. It was so weird, two complete assholes yelling at each other.

#big fan
#comedy
#interview
#patton oswalt
Do you know the scoop? Send us a Tip