Legendary rock star, author, and longtime New Yorker Patti Smith has won the "One Book, One New York" 2019 contest for her beloved memoir Just Kids. The joint venture between the Mayor’s Office of Media and Entertainment and Buzzfeed had New Yorkers vote online throughout April to select the book they'd like to read collectively as a city.

There will be 1,000 copies of Just Kids available to check out at libraries throughout the five boroughs. The memoir bested four other literary heavyweights in the contest: Fatima Farheen Mirza's A Place for Us, Nicholasa Mohr's Nilda, Another Brooklyn by Jacqueline Woodson, and Free Food for Millionaires by Min Jin Lee. To cull the list of finalists, the Mayor’s Office of Media and Entertainment, along with Buzzfeed editors, met with the New York Public Library and the Center for Fiction in Brooklyn. They eventually settled on five books featuring "a strong female character leading a complicated life," according to a press release.

Smith's memoir centers on her and her late friend Robbert Mapplethorpe's journeys navigating the city as aspiring artists in the late 1960s and early 1970s. Through Smith's sharp prose, New York City emerges as a character full of possibility and tragedy at once, and an entity inextricable from her trajectory as an artist. Just Kids was published in 2010, and it remains an especially prescient read—particularly as the effects of cultural and social shifts from the era continue to ripple outward, and amidst conversations about how artists are struggling to create and live in an increasingly unaffordable New York City.

Next Friday, during PEN America's World Voices Festival, Smith will be in conversation with Buzzfeed Books editor Ariana Rebolini (2018's One Book winning author, Jennifer Egan, will introduce her).

"When Robert Mapplethorpe and I stepped from Brooklyn to Manhattan, a half century ago, we were empty-handed yet possessed a vision of how we wished to evolve as artists and human beings,” Smith said in a statement. “New York was the city that welcomed and formed us, was emblematic of our struggles and successes. It is moving to imagine that our story will represent, through One Book, One New York, the countless stories of those who come to our diverse and complex city, with dreams of their own. Robert would be as happy as I am to achieve this recognition, especially grateful that the book has been chosen by the same readers for whom it was written.”

Just Kids is also being adapted into a miniseries for Showtime. 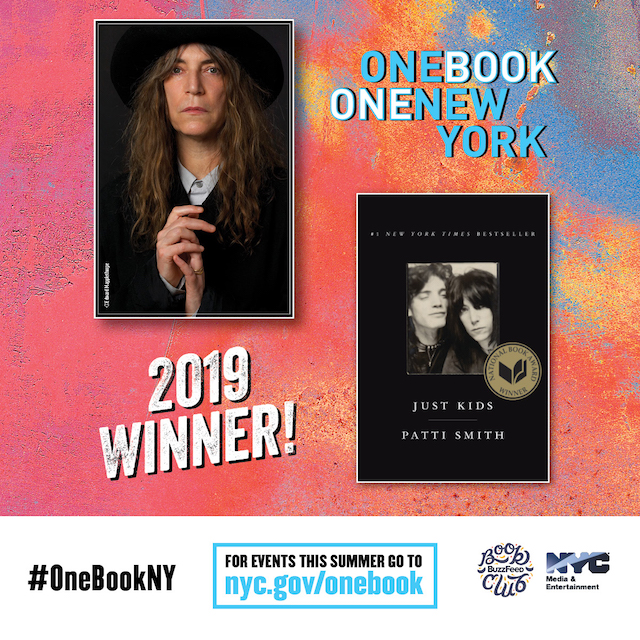 Patti Smith and her book 'Just Kids,' which won this year's contest. (The Mayor’s Office of Media and Entertainment)