Patti Smith’s scheduled private performance for the tenants of Hotel Chelsea was cancelled last night. The hotel, which is currently under the new management of bigwig real-estate developer Joseph Chetrit, has been undergoing substantial renovations, and the singer-songwriter’s continued involvement in its redevelopment has struck a bad chord, so to speak, with the residents of 222 West 23rd street and those who want to keep Hotel Chelsea’s spirit intact. It is because of their unrelenting opposition that Smith backed out. She has now released a statement on her website claiming that, “In respect for the wishes of the Chelsea Hotel Tenants Association I have canceled tonight's performance. My motivation was solely to serve the tenants. If this serves them better, then I am satisfied.”

The proposed “die-in” flash mob that was meant to happen at concert time outside of the hotel never did, due to Smith’s reconsideration. And although no one was out there with lighters in the air reciting the lyrics to “People Have Power,” we spoke with a few individuals who had some fighting words against Ms. Smith. “She really wasn’t doing it for the residents. She’s aligned with the people who are trying to evict the tenants,” stated a 16-year resident. An apt argument, as Smith had performed for both the family and friends of the developer as well as, allegedly, potential investors the night prior. Despite her insistence that she is not being remunerated for her involvement, we’re hard pressed to understand Smith’s motives. The resident we spoke to, who also happens to live on the same floor as Patti Smith’s old room (204, if you’re wondering), offered a theory: "Her room has remained completely intact, as a shrine to her career, while all the other rooms have been demolished." He went on to lament the fact that many of the Hotel's inhabitants are fans—the very people who helped solidify her career in the first place.

We also spoke with Jeff Courtney, a filmmaker and computer programmer, who left the Chelsea a little over a year ago when he was paid to leave in the midst of disputes over overcharges. Courtney, who lived in Bob Dylan’s former haunt, says he regrets leaving, “I miss the camaraderie, all the fun.” When pressed if current circumstances would make him reevaluate that statement, he told us, “There’s always a dark side, the crazy stuff. I loved it all.”

Smith maintains that her intentions are positive, but regardless, her presence has certainly served as a press catalyst for the battle tenants like Courtney have been fighting for years. And although the people may have had the power this time, judging by the way things are going, sometimes love just ain't enough. 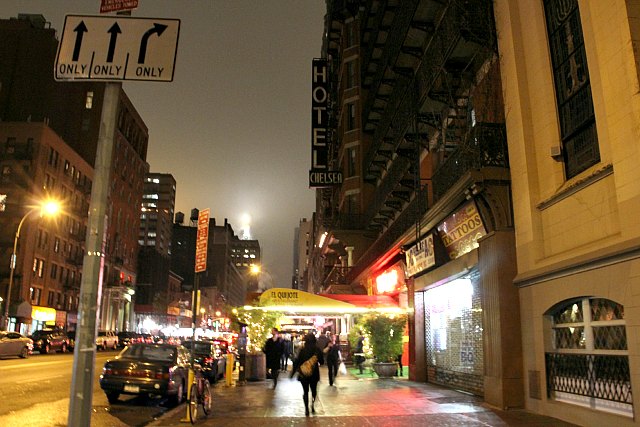 #chelsea hotel
#concert
#hotel chelsea
#patti smith
Do you know the scoop? Comment below or Send us a Tip