It looks like the developers are keeping true to their promise: Hidrock Properties, which purchased the Park Slope building housing the Pavilion Theater, will turn the space into a second Nitehawk Cinema location. Also noteworthy: No condos are being built at the site (for the time being). Hidrock COO Steven Hidary told the NY Times, "We had to decide, do we build condos or do we save Brooklyn? So we saved Brooklyn." Isn't it scary to imagine what Brooklyn would look like without real estate developers heroically swooping in to save it all the time?

Nitehawk Cinema opened in Williamsburg five years ago, giving New Yorkers its first experience of food and drink service during movies. Its food program is certainly the most ambitious one at any NYC theater. Apparently Nitehawk had approached Hidrock, which first purchased the building at 188 Prospect Park West for $16 million in 2006, about taking over the Art Deco Pavilion space a while back:

Mr. Viragh and Steven J. Hidary, whose family owns Hidrock, discussed making the theater a Nitehawk, but with the Williamsburg location also opening in 2011, the timing was off. Then, several years ago, Mr. Hidary said his family “wanted to bring out the full potential of the site.” The plan, which caused local consternation, was to build condominiums while also retaining a three- or four-screen theater. Last year, the city’s Landmarks Preservation Commission approved a six-story condo conversion for the one-story building adjoining the Pavilion, with units also to be built on the cinema’s second floor. Then Mr. Viragh came forward with investors who wanted to buy the theater and give Nitehawk a long-term lease..

Brooklyn’s residential building boom has led to concerns about market oversaturation, but Mr. Hidary said that the company’s decision was not affected by a softening real estate market, because Hidrock bought relatively low and just two dozen units would be built on a prime site. Condos might have even made them more money, but “we had to decide, do we build condos or do we save Brooklyn?” said Mr. Hidary, who is from Midwood. “So we saved Brooklyn.”

The sale of the theater, for $28 million to 188 Prospect Park West L.L.C., closed on Aug. 26, according to Mr. Viragh and Mr. Hidary, with Hidrock still owning the adjoining one-story site.

There are no plans for condos at the neighboring site; it's possible Hidrock still has PTSD from the bruising reception some condo renderings received last year ("It looks like a penitentiary!"). 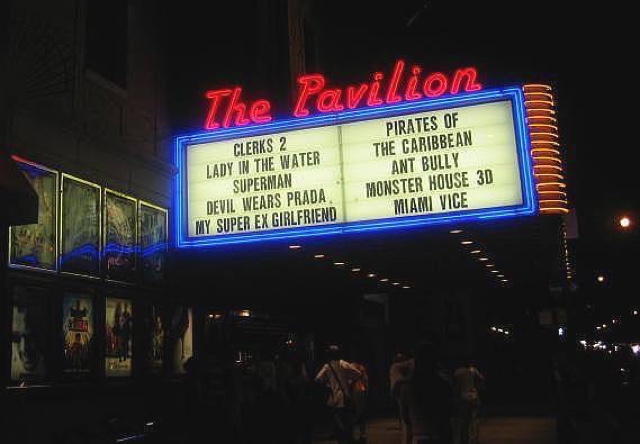 City Councilmember Brad Lander is pretty ecstatic, telling constituents on his website, "Nitehawk Cinema (one of the best theater operators in NYC) will convert the entire Pavilion building into a completely renovated 7-screen, 650-seat movie theater (and accompanying restaurant and bar). This is a victory for community activism and partnership. When we heard about plans to eliminate the theater, we spoke up loud and clear. Together with neighbors, we pushed to save the theater, and make sure any renovation/development respected the historic character of the neighborhood."

Of Nitehawk's plans, he said, "I'm pleased to report that the owners have committed to make it even more family-friendly. They'll still have a bar and restaurant, but are planning a wide range of programming to match our neighborhood. (And Hidrock is not planning to build a new residential building next door, at least at this time)."

Lander praised Hidrock Realty for working with him and other community activists: "There are, of course, many bigger problems in the world these days - and we will keep working on those, too. But for today, it’s nice to know that by working together, we will keep an important community landmark, and a gathering place for rom-coms, horror flicks, superhero summer smashes, quirky indie-films and of course date-nights for many years to come."

#movies
#nitehawk cinema
#park slope
#pavilion theater
#prospect park west
Do you know the scoop? Comment below or Send us a Tip