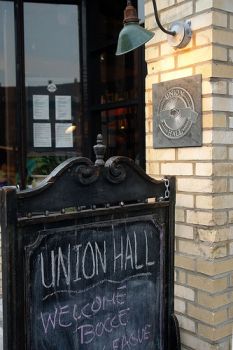 As if Brooklyn music venues aren't suffering enough right now, residents are currently rising up against what they call a "nuisance bar" in Park Slope. That bar is Union Hall. Jon Crow, one of those spearheading the campaign to shut the venue down, emailed us about an upcoming public hearing regarding the renewal of Union Hall's liquor license, admitting, "those of us fighting this nuisance bar are fully aware this hearing won't close it down."

In a long-winded 3-page press release, he tells the story of how the "enormous drinking establishment, performance venue, rock club and late night hot spot" has caused residents many restless nights; and "while it may look like a library from the outside, it’s anything but." (Even if it were a library, some Park Slope residents have found a way to complain about that establishment, too.) Regarding Union Hall, last spring 75 neighbors (some who think their homes are now "unlivable") signed a letter outlining their grievances, and now they've gotten themselves a public hearing.

Community Board 6 will hold the meeting to address the renewal of Union Hall's standing license, which expires on May 31st. The riled-up residents note their disapproval with the board, saying, “just last week CB6 approved the full liquor license for a new establishment on quiet Hoyt Street at Union." Nothing a few new Footloose-style laws that are being proposed won't "fix" -- reportedly, "both the Governor’s office and State legislators are seeking bills to further ensure that local commercial ventures aren’t approved at the cost of livable neighborhoods. On the City level, commercial zoning laws will need to better address usage to ensure that the approval 'bar' is raised high when a new full liquor license is being considered."

Both sides will have chance to debate the issue at the hearing on May 8th (6:00 p.m., at 250 Baltic Street). And assuming the move to shut it proves fruitless, old man Crow might want to consider a peaceful retirement in Park Slope West.