If you were walking down Second Street in Park Slope in recent weeks, you might mistake the Brenman family's latest elaborate Halloween display for just another FreshDirect truck idling at the curb. But this is no boring grocery delivery, this is "FleshDirect," a spooky wooden truck with a skeleton driver and a functional door so the Brenmans can still enter and exit their home during Halloween. That's dedication. 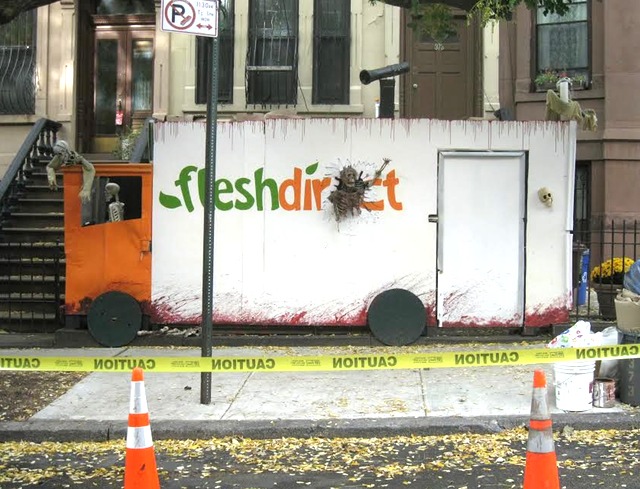 The family is in their tenth year of building extravagant Halloween scenes in front of their home, which they create from garbage and whatever else is "lying around." In 2011, they constructed a haunted American Savings Bank and in 2013, a pirate ship.

"I think this is probably the best one yet and it fits the neighborhood the best. Everyone gets FreshDirect in Park Slope," said 19-year-old Isaac Brenman. He said he stopped going trick-or-treating when his family started getting serious about their Halloween decorations. Everyone would come to them instead.

"The neighbors are generally tolerant and amused," said his father, Steven Brenman. "My one neighbor did take me to small claims court for all of the additional candy he had to purchase. He wanted me to reimburse him for all of the Snickers bars. That's still pending litigation."

On Halloween, Brenman will invite trick-or-treaters into his home to wander through a maze where neighborhood kids have volunteered to do some good old-fashioned scaring. "Some of the kids drop their candy and run," he said proudly.

Using a cannon strategically mounted at the top of his stoop, Brenman fired custom-made orange styrofoam balls with "Flesh Direct" written on them—Isaac estimated they had about 1,000 made. He noted, "We try to prevent any serious injuries. We always have a guy at the front door who says, 'Enter if you dare,' which my lawyer says is the same thing as a release form.'"

As a woman pushing a stroller and sipping from a Starbucks cup walked down street, Brenman said to his son, "Bet I can get that chai latte" and catapulted another orange ball down the sidewalk.

#FleshDirect
#FreshDirect
#halloween
#halloween decorations
#NYC Halloween
#park slope
#original
Do you know the scoop? Comment below or Send us a Tip