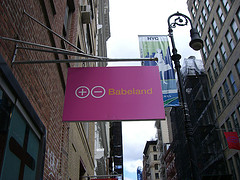 The NY Post spoke to two Park Slope residents before declaring the new Babeland sex toy shop would be giving off some bad vibes to the locals when it moved into their 'hood. But NYMag points out the Park Slope parents, if the Brooklynian message board is any indication, are rather delighted by their future neighbor.

One stroller pusher declared, "How silly of the Post. Where do they think all the babies come from?" Well, certainly not from vibrators, but point taken. Other residents jokingly inquired if strollers will be allowed, while one commenter declared, "I give Babes two weeks before it looks like the Tea Lounge."

For the most part, the locals have one message for Babeland, summed up by a commenter: "Park Slope loves you. We can't wait." Seems like those two are gonna get along just fine...but won't someone think of the children?