Paris Is Obsessed With Brooklyn & It's Getting Weird In the long history of romances driven by obsession, one universal factor has always played a part: The obsessed has formed the object of their affection into their own demented shape, never truly seeing it for what it really is. Paris's crush on Brooklyn has reached this type of obsessive level, and it's getting très weirdburg.

Photographer Sai Mokhtari recently spent three weeks in Paris, along the way capturing the Parisians' mania for New York City and its most marketable borough. What she saw ran a spectrum, from "charming" to "ce qui la baise"—for the latter, look no further than Tribeca Cafe on Rue Cler. Their bathroom repped NYC with Dunkin' Donuts, Nathan's and Panda Express signage, along with a graffiti tagger named "Eric." You guys know Eric, right? 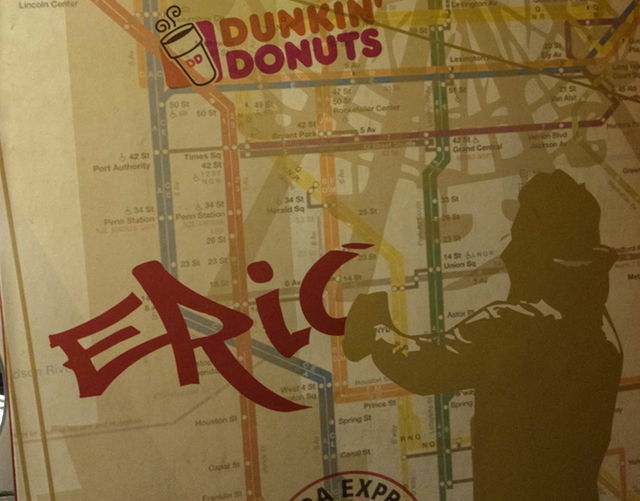 Back in the day, sending a 225-ton statue was enough to show one's affection, or even a street naming. Now, Paris just keeps calling and calling and putting up photos of us in its locker. It's even starting to look a little bit like us. The Brooklyn name and, sigh, aesthetic has replaced Paris's own uniqueness in many little corners. And not so little...

Le Bon Marché, the city's large, historic and very tasteful (sincerely) department store, just programmed their space with a Brooklyn theme. Not all of NYC (like when the store went with an LA-theme), but specifically Brooklyn. From Vogue:

Le Bon Marché’s director of the style office, Jennifer Cuvillier, explained that the team had initially considered all of New York City before realizing that “Brooklyn was strong and different enough by itself to tell us a story.” When a communications director referred to the store’s transformation by turning Brooklyn into a French verb, as in Brooklyniser (BROOK-lin-EE-SAY), you get a sense of the team’s immersion.

Of course, we love Paris, too, and we've even injected our own bizarro bits of it here. Have you seen that place Sadelle's? It's as if Wes Anderson built a Parisian bakery in Manhattan. But Paris, when we come see you, we want to see YOU, not us. We want to escape our own cobblestoned streets for yours, which seem so much more romantic, and like they're always dappled in candlelight. You can come see us, too, and get that Authentic Brooklyn Experience™ you deserve.

Don't mind if I do. Hello again NYC #parislovesBK

A couple of years ago, Vice took a long look at this Bizarro Brooklyn growing in Paris, and it doesn't seem much has changed since.

Many Parisians, “trendy” is synonymous with New York, especially Brooklyn, especially Williamsburg, which they treat as both a geographical area (which it is) and a Wes-Anderson-meets-Woody-Allen fever dream (which ignores the long history of the borough as a home to working-class people and minorities, but hey, whatever). Brooklyn, for them, can be reduced to a specific style that's little more that a string of signifiers—just like how in Americans' heads, "Paris" means a guy in a beret and a striped shirt riding a bicycle with a basket of baguettes in the front.

Well, maybe some things have changed, "thanks" to the Parisians who have gone way off the Anderson-Allen brand message.

Click through for a look at NYC, and mostly Brooklyn, all over Paris—you'll spot ads for learning Wall Street English, tributes to Keith Haring, Brooklyn Brewery, and so so much more (than was ever necessary).

#brooklyn
#france
#paris
#original
Do you know the scoop? Comment below or Send us a Tip