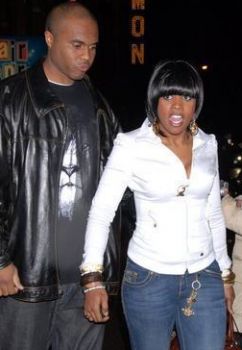 Remy Ma, better known for her court hearings than for her Grammy nomination, is having trouble becoming "an honest woman," as the saying goes. The rapper was supposed to be married on Rikers Island yesterday to her fiancée Papoose -- but when her groom brought a questionable gift for his bride, the wedding was called off.

The Daily News reports that he showed up with a handcuff key; they were told by a correction official that the key that was found "easily opened handcuffs that we and other law enforcement officials use."

It is believed that this was part of an escape plan, but maybe Papoose just got cold feet and was just looking for an easy out. He was promptly asked to leave and is now banned from the facility for six months. Meanwhile, his bride-to-be remains behind bars as she faces sentencing for shooting Makeda Barnes-Joseph; she could get up to 25 years in prison, which she hopes will get shortened due to fan mail.

UPDATE: Remy Ma was sentenced to 8 years in prison. The NY Post reports:

After the sentencing, a man identified by court officers as Remy Ma's fiance, fellow rapper Papoose, began screaming in a hallway outside the courtroom. "All you want is money!" he said, apparently referring to the victim.

"Lock me up! Lock me up!" he then shouted to court officers, who instead escorted him to an elevator and out of the courthouse.

She'll be doing her time in an upstate prison, where the two will likely wed.