Pandas May Be Headed To Bronx Zoo, If All The Stars Align

Last year, Representative Carolyn Maloney announced that she was trying to get pandas for New Yorkers, but ran into a bit of a mayoral roadblock. But now, perhaps in the spirit of Re-Election 2017, Mayor Bill de Blasio is reportedly supporting Maloney's plan.

According to the Daily News, "The mayor, who had been one of the last holdouts in the push to bring the cuddly black-and-white bears to the five boroughs, has had one of his top aides reach out to Chinese officials to say he is now on board and would like to place the animals in the Bronx Zoo."

The big problem with pandas is that while they are adorable, they are also expensive pains-in-the-butt to maintain. For instance, they eat bamboo, which has very little nutritional value, and are terrible at reproducing! Pandas have to be leased from China, and if panda cubs are, miraculously, born, the zoo has to pay a panda cub fee to China. 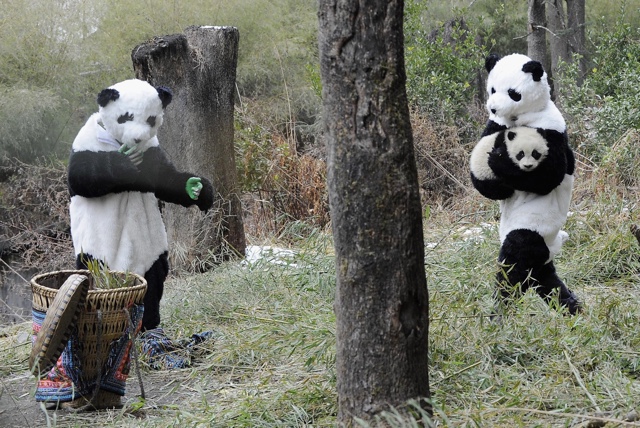 Zoo-keepers dressed up as giant pandas attempt to put Cao Gen the panda cub into a basket in Wolong, Sichuan Province of China, back in 2011 (Getty Images)

The News reports, "Each animal costs about $1 million a year, including food, trainers and habitat, according to the Panda Conservation Foundation of America. De Blasio has now agreed to back the plan on the condition that no taxpayer money will be used for the animals’ upkeep, according to the letter de Blasio’s director of intergovernmental affairs wrote last week to Chinese officials. The costs 'must be financed by private investment and philanthropy,' Emma Wolfe wrote."

Governor Andrew Cuomo, who gave his blessing for the plan last year, suggested to Maloney that the pandas go to upstate NY, but Maloney wasn't wants them here. She told the News, "I want to be able to visit the pandas, too, and I want New York City schoolchildren to be able to see them."

Back in 2005, the Washington Post reported, "Washington, Atlanta, Memphis and San Diego, collectively spent $33 million more on pandas from 2000 to 2003 than they received in revenue from exhibiting them." Of course, NYC's population is bigger than those four cities combined, and NYC saw 56.4 million visitors last year.

"The concept of bringing giant pandas to NY which the Congresswoman is proposing is complex and would require that a number of complicated issues be considered and resolved before any such plan could be implemented.

Any decision to bring giant pandas to New York would need to be based on positively contributing to the conservation of giant pandas in the wild and a determination that all the requirements necessary to keep the animals well in NY could be met.

Very importantly, there is no funding for this initiative. Building and maintenance of a panda exhibit would be an on-going effort that would require tens of millions of dollars up front and annual support monies for pandas for however long they would be in NY. Any agreement to exhibit pandas would have to come with a guarantee of provision for the necessary funds."

#animal
#bronx zoo
#carolyn maloney
#mayor de blasio
#nyc
#panda
#pandas
Do you know the scoop? Comment below or Send us a Tip