Over Hamilton's Grave: Another Hit is Born

On Christmas Eve of 1839, four Austrian villagers stood by the tombstone of Alexander Hamilton and serenaded Lower Manhattan with Christmas songs. They performed in Trinity Church’s graveyard because the church itself had been destroyed by snow storms. The setlist of Austrian folk songs is unknown, except for one carol named “Stille Nacht! Heilige Nacht!” which made its American debut that night.

After New York, the quartet took “Stille Nacht” to New Orleans, St. Louis, Pittsburg, and Philadelphia - to roaring success. Whatever the 1830s version of a viral hit was, the Rainer singers of Zillertal valley had stumbled onto one. Soon, local musicians translated the song into English: “Stille Nacht! Heilige Nacht!” became “Silent Night! Holy Night!”

Bing Crosby turned “Silent Night” into the third best-selling single of all time, almost a century later. But the song’s origins didn’t exactly spell out global success (or covers by Justin Bieber, Destiny’s Child, and EDM sensation Kaskade). In fact, “Silent Night’s” road to stardom was paved with incredible coincidences that go back to a young teacher in Austria’s sleepy countryside.

Franz Gruber worked as a school teacher and church organist in a village near Salzburg when he unknowingly composed one of the most iconic holiday melodies of all time. Oberndorf, population 1,914, is the last place you’d go in search of a platinum record. And yet, it’s where Gruber felt inspired to write “Stille Nacht! Heilige Nacht!” for Christmas mass of 1818. 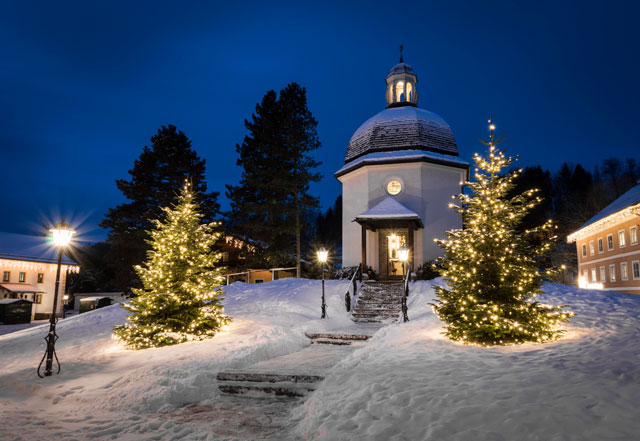 When it came to performing “Silent Night,” Gruber had to improvise: The Oberndorf church organ was broken, so he wrote the song for voice and guitar. If it wasn’t for the damaged organ — and the organ builder who came to fix it — “Silent Night” would have probably faded into oblivion.

Karl Mauracher came all the way from Zillertal valley to repair the instrument and fell in love with the carol. He took the score of “Silent Night” across the snow-capped Alps - where the New York-bound Rainer singers adopted it into their repertoire.

Austrian Airlines brings New Yorkers closer than ever to the country of “Silent Night.” An award-winning, nonstop flight to Vienna from Newark or JFK lets you arrive in Austria’s winter wonderland in holiday spirits. Try the brand new Premium Economy class for an elevated experience with exceptional cuisine, more space, and extra amenities. Austrian Airlines’ Business Class offers an onboard chef serving the finest Austrian delicacies, and a Viennese coffee house with 10 freshly-prepared Austrian coffee specialties to warm you up. 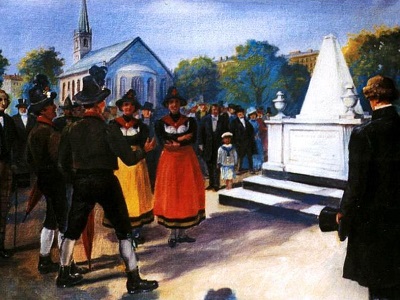 Back in 1839, it took the Rainer singers over a month to cross the Atlantic - with no chef or coffee house to speak of. They sailed for 28 days and weathered ten storms before mooring in America. A few Rainers were barely 18 and spoke no English when they performed at the Hamilton Memorial. It’s easy to imagine the anxiety of arriving in New York with just their Alpine music to survive. Or maybe the comfort of singing “Stille Nacht! Heilige Nacht!” on their first Christmas far away from home.

This post is written by Gothamist sponsorship staff on behalf of Austrian Tourist Office.