Linus Coraggio, a New York-based artist best known for the metal "junk" sculptures he installed around the East Village in the 1980s and '90s, showed up at Elena Ab Gallery on Church Street in Tribeca on October 8th, only to find that the gallery had been padlocked by NYC marshals. Coraggio, who was set to deliver six of his works to Dinosaur BBQ in Brooklyn for a commissioned installation, was now unable to access 45 of his artworks, worth about $136,600.

Coraggio's work has been locked inside of the gallery at 185 Church Street for over a month now, along with the works of fellow artists Christopher Hart Chambers, Nina Germans and Brian Gormley. Chambers, who currently has about 15 works locked inside the gallery, is scheduled to show several of them at the Nassau County Museum of Art on November 20th.

Elena Ab, the gallery's owner and a painter in her own right, gave the artists no indication that she was under threat of eviction for months of unpaid rent, according to court documents filed by Coraggio.

"I was hard-wired to bust in there and get my art back, but I restrained myself," Coraggio told us this afternoon. "I haven't been sleeping since."

Ab, who's managed her gallery on Church Street for three years, says she was in the dark about a marshal's order for her eviction.

Reached at the number associated with the gallery, Ab told us that she had no heat in her gallery from November 2014 through March 2015, and stopped paying her rent in protest. "I paid on time until last year when they didn't give me heat for four months," she said. "If the owners have a problem with me they should talk to me. They have no right to lock us out."

When her heat went out, Ab said, the gallery was very cold. "I had to cancel shows. Where am I supposed to pay from, out of the sky?" 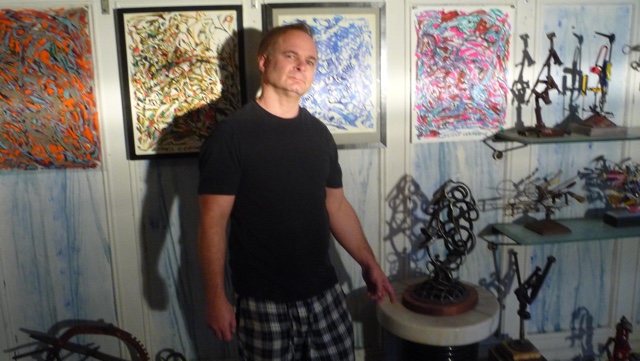 Coraggio with some of his artworks (via the artist).

Coraggio and the other artists fear that Tribeca Associates will attempt to sell the contents of the gallery in a marshal's auction, and are petitioning for all artworks to be left alone until the artists have proved their ownership in court.

"We have to prove in court that the gallery owner didn't own the art, which she didn't," said Jackie Bukowski, the attorney representing Chambers and Coraggio.

One of the documents presented in Bukowski's court filing is a photocopy of a handwritten consignment agreement that Coraggio made with Ab for a solo show back in May (many of his works have been inside the gallery since the spring). The agreement, signed by Ab and the artist, states that the artwork is Coraggio's own.

In the immediate aftermath of the lockout, Coraggio says, the owner of the building e-mailed back and forth with him, assuring him that it had been a mistake for the marshal to padlock other artists' work inside Ab's former commercial retail space. However, D'Orazio sent an e-mail to Bukowski on Monday asking the attorney if the impacted artists would like to propose a fee in exchange for access to their art. It reads: "Are your clients interested in making an offer to persuade the landlord not to contest their [the artists'] claims?"

To which Bukowski replied: "They will clear everything out of the space by this coming weekend so your client can rent it."

"This same thing happened to me in 1985, when the owner of the gallery I was dealing with suddenly decided to go to Europe for two months," Coraggio told us this afternoon. "I took matters into my own hands. I ran an electric cord down the front of the building and I was able to cut the lock with an electric grinder. Now it's post 9/11... and [a gallery] padlocked by the marshals. There's an untold amount of liability and risk."

Coraggio and Chambers will appear in Civil Supreme Court on November 20th. Ab, who told us on Monday that she was between lawyers and would be back in touch once her representation was secured, did not immediately respond to a second request for comment.

According to both Ab and Chambers, Chambers art had been recovered as of late March. Ab says Coraggio's work has been returned as well. "The rest of the items remaining at the Elena Ab Gallery are works of either Elena Ab either finished or unfinished or of other artists," she stated. "These items are the subject of a current court case in New York County Supreme Court with a hearing scheduled for April 20, 2016."

#Art Gallery
#locked up
#tribeca
Do you know the scoop? Comment below or Send us a Tip