Shakespeare in the Park, Central Park

Shakespeare In The Park
The big daddy of them all. The Public Theater's annual summerlong celebration of the Bard at Central Park's Delacorte Theater sees two (oftentimes star-studded) productions every season—this year, it's Measure for Measure and All's Well That Ends Well. Tickets are free, but plan to camp out in line for several hours if you want in. (Or, try registering for tickets online and the stand-by line, which forms at the Delacorte before each show.)

Summerstage Theater
For a still-popular but less difficult ticket, try Summerstage, run by the City Parks Foundation. Summerstage is hosting twenty nights of theater in seven parks around the city the summer, all for free. There's a good mix of new and classic productions this summer, ranging from the musically-inclinedIndomitable: James Brown to the kid-friendly Tunde's Trumpet, and Greek classics Oedipus and Seven Against Thebes.

New York Classical Theatre
With a mission to present classics in nontraditional settings (sometimes in multiple places for one show), the Classical Theatre has a reputation for some of the most visually unique productions anywhere in the city, and audiences are invited to watch rehearsals for free. This summer's productions include The School for Husbands by Moliere and Henry V, whose performance includes a trip between Battery Park and Governors Island.

Queens Theatre in the Park
For a more modern spin, head of to Flushing Meadows Corona Park for the Queens Theatre's summerlong production of A Jew Grows In Brooklyn, Jake Ehrenreich's musical comedy, which played for a year on Broadway. It's playing Thursdays through Sundays from July 28-August 21. 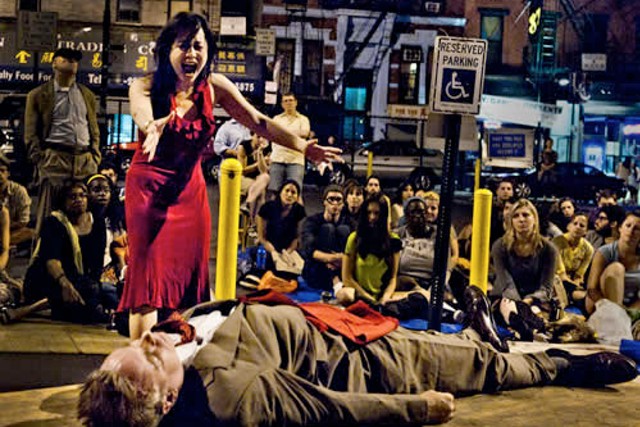 Shakespeare in the Parking Lot
For those who prefer their Bard in a less format setting, check out the 20th season of Shakespeare in the Parking Lot, an "intrepid, bare-boned and often gloriously ingenious adaptations of the classics." This year they're tackling The Comedy Of Errors, moving the comedy of mischance and mistaken identity to a modern pizzeria in Little Italy, and it's yours to enjoy for free.

July 7-23, Municipal Parking Lot at the corner of Ludlow and Broome Sts, Thursdays - Saturdays at 8:00 p.m.

FringeAL FRESCO
Yes, the New York International Fringe Festival puts on more than 1,200 independent performances over the course of two weeks, and not all of them are outside. But FringeAL FRESCO offers a handful of shows—this year, see Not My Problem and Inside, Not Looking Out—in the great outdoors, at venues like Washington Square Park, Hudson River Park, and the Westbeth Courtyard.

#Gothamist Guide To The Summer
#gothamist summer guide
#guide
#outdoor theater
#parks
#plays
#shakespeare
#summer guide
#theater
Do you know the scoop? Comment below or Send us a Tip