Our Five Minutes In Heaven With Game Of Thrones' Natalie Dormer Sitting on the Iron Throne and trying to throw our best Joffrey-inspired shade onto the realm wasn't the only highlight of last night's premiere of the pop up "Game of Thrones: The Exhibition" in midtown. There were Game Of Thrones-inspired ales on Game Of Thrones-inscribed glasses; wooly couches that wouldn't look out of place at The Wall's rec room; fat chunks of meat circulating the room on petite platters; giant photos of Daenerys Targaryen; and best of all, a few flesh-and-blood residents of Westeros. And we maybe fell in love with one of them.

Cast members there included Kit Harington (Jon Snow), Maisie Williams (Arya Stark), Sophie Turner (Sansa Stark), John Bradley (Samwell Tarly), Rose Leslie (Ygritte), and Natalie Dormer (Margaery Tyrell). Harrington and Leslie—who are sweethearts on the show and dating in real life—were the first to leave (after Harrington gave the reporter in photo #7 more than her fair share of facetime). Bradley seemed to disappear into the packed crowd as the night went on, while Turner and Williams—both tall as grain silos in their stilettos—were as adorable and charming as you'd hope. Even as they were leaving with their entourage, they stopped to play the "Blackwater Bay Interactive Experience" and pose for our camera.

And then there was Dormer. Have you ever wondered what it would be like getting locked into a Star Trek-style tractor beam? That no matter what you did, you would inexorably be pulled toward someone or something whose will could not be denied? That's what it's like looking into Dormer's eyes.

She never broke eye contact with us during the five or so minutes we muttered our way through talking to her. We were so caught off-guard by those eyes, we couldn't quite grasp at anything to ask...so we just chit chatted about NYC. "Well, Dormer is a British actress...and Cousin Matthew loves the subway...so maybe Dormer does too?" was as much logic as our brain could muster at that point. 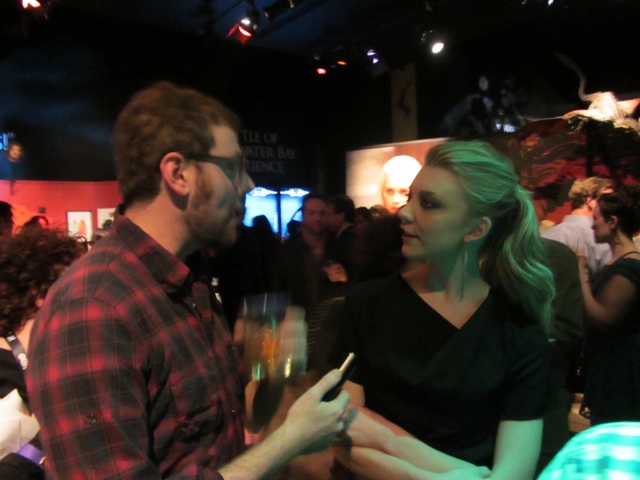 The only proof of the interviewers' brief romance (Nell Casey/Gothamist)

Below, we've reprinted the whole exchange, so you too may catch a whiff of the magic. Or at least sympathy-feel the awkward pangs of unrequited love at first sight.

Have you gotten to spend much time in the city in your life? I screen tested for The Tudors in NY. That was my first experience of NY, being flown here to screen test with Jonathan Rhys Meyers. So I have very, very fond memories of New York—New York helped give me my first big break.

That's pretty cool. [At this point, the interviewer decides that all British actors must love the subway] Do you have a favorite subway, a line you have to take a lot? No, you know what, 'cause when I'm here, I'm normally here on work. So if I'm here for press, for junkets or for shoots, I usually get driven everywhere when I'm in New York. But I'm hoping to be here for another job next month. So I'll be taking the subway then.

What are you doing? [Interviewer has already forgotten what they were talking about] I can't tell you. But it will be announced within a couple of weeks. So I'm very much enjoying looking forward to walking on your streets. As an adoptive inhabitant of New York for a month or so...

Are you going to buy or rent an apartment in a certain area? [Interviewer immediately realizes this might sound a bit creepy. Forges onwards.] Is there a certain place you'd like to live? I'm staying with a friend at the moment, he lives in Chelsea. He's got a beautiful brownstone. So that's kind of typical New York, right?

Yeah, it's a kind of type of typical New York, yeah. [Interviewer sincerely hopes this didn't sound mean] OK, well that's—I walked the High Line yesterday, and all the buds are coming out, spring is coming.

[She said "spring is coming!" Is she flirting?] Right, yesterday was the first pretty nice day, wasn't it? All the violets were out, and there's buds in the trees, so hopefully all those lovely flowers that they take such good care of up there, they're all starting to poke through, so maybe NY will start to get springtime.

I think so. I think maybe with you guys coming into town, it's sort of a good omen and everything. [Interviewer worried he is literally leaning into her face.] I hope so. I've been told that NY in the spring is pretty special.

Have you not been here in the spring? [Interviewer wonders if he should start quoting Shakespeare] No.

You're in for a treat for sure. [This is special] It's a special time of year.

It's very special. [You're special] All of a sudden everybody starts coming out of their shells, out of their apartments. They start to walk down Central Park, and the greenery is starting to come out.

Do you ever bike or anything? [Trolls are gonna love this one] Yeah, I love cycling.

This is a big biking city. Oh yes, just in the park or out and around?

Do you think you might try it when you're here? [Interviewer wonders if he should heroically offer his tutelage] Why not?

Yeah, why not? [THIS IS GOING SWELL]

Our passionate exchange is briefly interrupted here by a waiter and his chicken wings. We press onwards with the only Game Of Thrones-related question of the interview.

Do you guys start filming season 4 soon? Have we been officially green lit for season 4 yet? [Someone else answers 'not yet'] Not yet.

Oh really? [Interviewer thinks maybe they should get back to talking about tandem cycling in the spring together...wasn't that what they were talking about?] It's sort of an assumption that— It is an assumption. If one were to assume that we would go again, we would start shooting in July.

[This is all very exciting] That's very exciting. It's really nice to meet you. I will take your advice about cycling in NY next month.

Beautiful views of NJ, if you like looking at a smoggy hellhole. [Nailed it] OK. Where do you live?

[Heart palpitating. This is the moment.] I live on [ADDRESS REDACTED]. Ok, awesome. I'll take your advice, I'll get on my bike.

#game of thrones
#game of thrones the exhibition
#got
#natalie dormer
#television
#tv
#original
Do you know the scoop? Comment below or Send us a Tip
A new Gothamist is coming! We’ve moved comments over to our beta site. Click here to join the conversation and get a preview of our new website.