Our First Subway Was Much Nicer

Our first underground transit system in NYC was a pneumatic subway created by Alfred Ely Beach, and despite being constructed back in the 1870s, some aspects of it were a lot nicer than the crowded old cans we ride in today. For one, this subway's station had chandeliers and a waiting room with a piano. Secondly, it doesn't appear anyone ever had to claw their way out of a stalled train.

The line was short, running just one block under Broadway from Warren Street to Murray Street, but the area was seeing so much congestion at the time ("We can travel from New York half-way to Philadelphia in less time than the length of Broadway," the NY Tribune complained) that an underground solution was perfect. It did have plenty of critics, however, particularly when the pneumatic idea had not yet been implemented, and the subway cars were to be drawn by horses.

"It’s better to wait for the Devil than to make roads down into hell," one early subway critic said, according to Scientific American (where Beach was publisher, incidentally). But with the success of London's Underground system, and the invention of an "airtight tube that could carry mail and packages the short distance" via air pressure, Beach revisited his idea, ditching the horses and moving the trains via air. (This is explained in The Race Underground, a comprehensive history of the subway rivalry between NYC and Boston.) 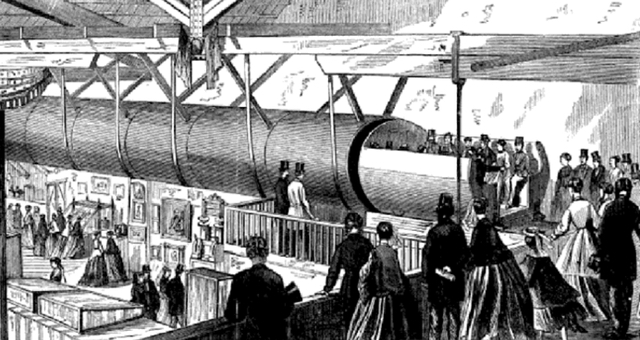 Exhibit at the American Institute Fair, 1867.

He called his system “swift as Aeolus (god of Breezes) and silent as Somnus (god of sleep and dreams)." And at the American Institute Fair held at the 14th Street Armory in 1867, New Yorkers began to get on board. After all, the NY Times declared that his invention would bring passengers "from City Hall to Madison Square in five minutes, to Harlem and Manhattanville in fourteen minutes, to Washington Heights in twenty minutes, and by sub-river to Jersey City or Hoboken in five minutes."

After clearing some obstacles set down by Boss Tweed, Beach finally found a space to set up his Beach Pneumatic Transit Company: the basement of Devlin’s, which he leased for $4,000 dollars a year for five years. He cleared a cylindrical tunnel in 58 days, and the city's first luxurious subway line opened on February of 1870. 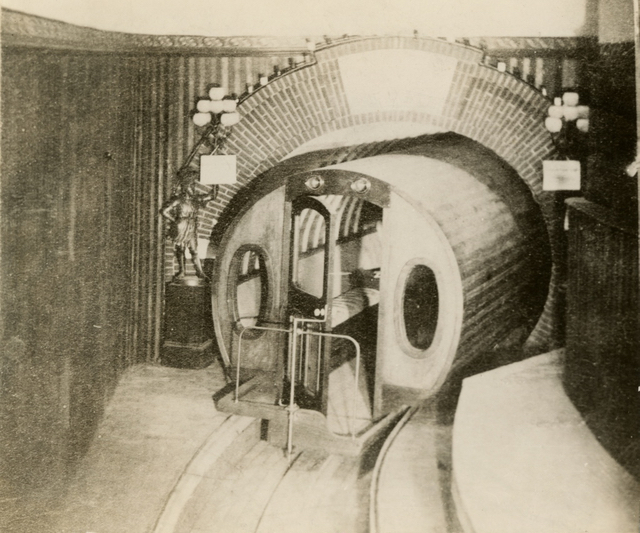 The Beach Pneumatic Subway Tunnel under Broadway. (Courtesy of the New-York Historical Society)

"The design for the car was unlike anything people were riding on the streets above. It was much smaller than the horse cars, and upholstered seats [ed. note: no thanks!] lined the sides so that it felt like a comfortable lounge inside, with bright lighting and plenty of room to hold twenty two people. The sliding doors closed with a whoosh. Beach wanted to dazzle [New Yorkers], not to mention distract them from any fears they might have of being underground with vermin and demons. He remembered the stories about how dark and miserable the London subway was. And he knew he had only one chance to convince New York that his subway was the future of transportation. He spared no expense, using more than $70,000 of his own savings to make sure the station was a place people would actually enjoy waiting. The waiting room was enormous, more than 120 feet long, and it was lavish, with chandeliers, mirrors, a towering grandfather clock, a fountain with a basin stocked with goldfish, paintings, settees and a grand piano."

On top of all that, "the tubular train worked beautifully, whisking the visitors one block, from Warren Street to Murray Street and then sucking them back. The reviews the next day were glowing."

The demonstration railway only lasted until April 1873, and as noted by the Bowery Boys, it "failed to influence the future of transportation," but it was probably better than that whole moving sidewalk idea, which was proposed around the same time Beach's subway opened.

As for what happened to the old tunnel, workers building our current system around 1912 discovered it along with the car and piano, but it's believed the tunnel was destroyed in the process.

Evergreen N.B.: Tell your state representatives and Governor Cuomo to stop robbing the MTA of badly needed funding and figure out a way to come up with more cash for a 21st Century transit system. Or maybe even just a late 19th Century one...