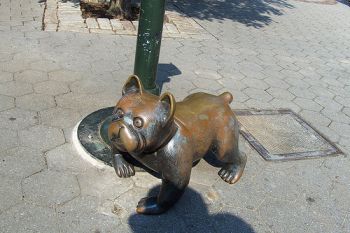 Even though Tom Otterness, who just installed his newest creation in DUMBO, cheers up commuting New Yorkers underground...he has a dark past that wouldn't make anyone smile. The artist, in short, shot a dog (that he adopted) for the sake of "art" -- something he did, and filmed, 20 years ago.

He's apologized for the unforgivable act, but with each new piece he creates or installs -- it seems his past will always come back to haunt him. Here is one of his latest emails addressing the situation:

"As you must understand this is a very difficult and painful situation for me. Thirty years ago when I was 25 years old, I made a film in which I shot a dog. It was an indefensible act that I am deeply sorry for.

Many of us have experienced profound emotional turmoil and despair. Few have made the mistake I made.

I hope people can find it in their hearts to forgive me.

Is the apology enough? The Brooklyn Eagle doubts it was the one many were hoping for. In the meantime, there are still "artists" killing innocent animals; Guillermo Vargas Habacuc tied a dog up, put it on display in a gallery, and starved him to death -- something that will be repeated at the Centroamerican Art Biennial this year.