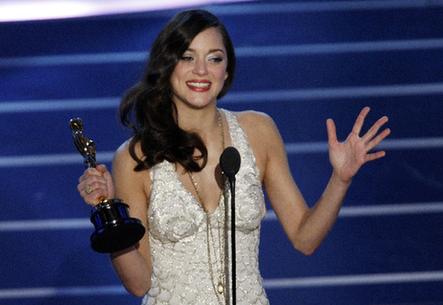 Before going for the gold, French actress and Oscar winner Marion Cotillard made some remarks in a 2007 interview regarding 9/11, and some aren't as charmed by her words as they were by her Oscar speech. Nonetheless, Cotillard sides with the conspiracy theorists when it comes to 9/11...and the moon landing! BBC News has a partial transcript:

"We see other towers of the same kind being hit by planes, are they burned?" she asks. "There was a tower, I believe it was in Spain, which burned for 24 hours. It never collapsed. None of these towers collapsed. And there [in New York], in a few minutes, the whole thing collapsed."

The Twin Towers, she claims, were a "money sucker" that would have cost much more to modernise than to destroy.

The actress goes on to cast doubt on the Moon landing of 1969. "Did a man really walk on the moon?" she asks. "I saw plenty of documentaries on it and I really wondered. In any case I don't believe all they tell me."

Well, WTC leaseholder Larry Silverstein (who got the lease shortly before the attacks) did get a rather large insurance payout. As for Cotillard, she also noted that, "I tend to believe in the conspiracy theory," and finds them "addictive." Her lawyer stated that the actress "never intended to contest nor question the attacks of September 11, 2001, and regrets the way old remarks have been taken out of context."

Only one way to settle this, she needs to face off with Bill Maher!