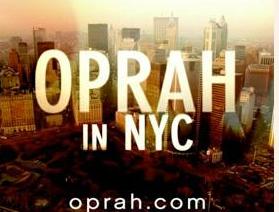 OMG OPRAH! After weeks of anticipation - and insane craigslist listings - a few thousand lucky fans got to watch the season premiere of Oprah from the WaMu Theater at Madison Square Garden. The show featured David Letterman and a performance from Lisa Marie Presley. And, yes, Oprah Winfrey did start off the show with "Hellloooo, New York."

The Daily News reports that people were screaming "I love you Oprah!" during the commercial breaks. Winfrey explained to ABC 7 why the show headed to New York this year:

One of the reasons we're here in New York is because of 9/11, and last year was the fifth anniversary. And everybody would expect you to, and everybody was here, and a lot to talk about. And by the time it's the sixth anniversary, it's not as prominent on some people's minds throughout the rest of the country. But I know that it is still seared into the hearts of all New Yorkers. You can feel it already.

Tomorrow's show, the September 11 program, is "Six Years Later: The Children of September 11." The description says, "The Oprah Show pays special tribute to the children of 9/11 who lost a parent six years ago." The Post adds that the show will also focus on positive things that have come out of the tragedy, such as Firefighter Stephen Sillier's family establishing the Tunnel to Towers 5K which raises money for pediatric burn units and children who have lost one or more parents. Sillier had run through the Brooklyn Battery Tunnel to get to the Towers on September 11.

The show airs at 4PM on Channel 7 in the New York area and we think Channel 55 on Time Warner re-airs Oprah at 1AM.