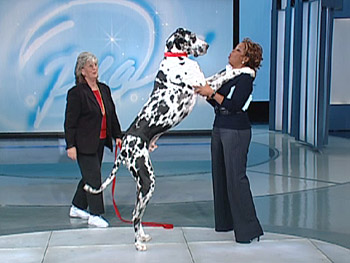 Yesterday tickets went on sale for the two Oprah Winfrey show tapings next month (September 10th and 11th) at the WaMu Theatre at Madison Square Garden. The internet went into overload immediately, shutting down the ticket websites.

WABC reported: "Due to the amount of interest in these tickets, some people are experiencing difficulties logging on to the ticket site as of 9:00 a.m. Friday." Of course this means that Craigslist is now filled with some pricey options.

On her website, Oprah declares: "On Monday, September 10th, there's only one place big enough for our season premiere! New York City—here we come!" If you can't get a hold of tickets, you can always see her at Madame Tussaud's!

Oprah's last big trip to NYC was in 2005, when she produced the Broadway musical adaptation of The Color Purple. During that stay she was a guest on The Late Show at The Ed Sullivan Theater, where she and David Letterman put to rest a long-simmering non-feud that neither of them could seem to substantiate. The pair spent her segments on the air discussing Oprah's work to improve healthcare for people in Africa. Letterman then walked Winfrey down the street on-air to her own respective theater.