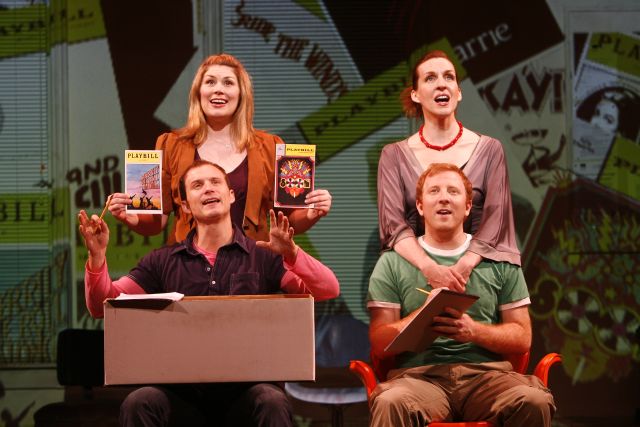 Here’s an abbreviated list of show biz references that went completely over my head during [title of show], Jeff Bowen and Hunter Bell’s audacious meta-musical about two theater “g’nerds” struggling to write a musical: Mary Stout getting hit by a hot dog cart; Dee Hoty; Henry, Sweet Henry; Betty Buckly, Dina Manoff, Ruthless: The Musical. I could go on – that’s just the first ten minutes. Suffice it to say, [title of show] is first and foremost a Broadway musical for people who adore Broadway as much for its dreadful flops as for its glittering triumphs.

Bowen and Bell play themselves with endearing insouciance, and much of the dialogue is adapted from actual conversations as they were trying to come up with an idea for a musical to submit to the New York Musical Theatre Festival four years ago. So the “story” is a clever chronicle of their creative process, with help from their two game friends, Heidi Blickenstaff and Susan Blackwell, who also play themselves. The first scene goes like this:

Wait, so everything I say from now on could actually be in our show?
HUNTER: Yeah.
JEFF: Like this?
HUNTER: And this.
JEFF: (pause) This too?
HUNTER: This too.
JEFF: So I could say “Wonder Woman for President,” and that would get into our show?
HUNTER: Uh-huh.
JEFF: Wonder Woman for President. I’d watch a show that says that.
HUNTER: Me too. But do you think other people will wanna watch something like that?

Cue music, provided by a single onstage keyboard player, Larry Pressgrove. As it turns out, people do wanna watch something like this, and not just for all the show biz references. [title of show] is full of laughs for guys like me who aren’t walking encyclopedias of Broadway trivia, and Bowen’s catchy score is lyrically allusive but musically original, never succumbing to Forbidden Broadway camp.

What’s ultimately winning about [title of show] is the way the four smart and talented performers exploit the absurdity of their non-story by constantly poking through that old fourth wall to mock the conventions of the form. And beyond the comedy milked out of their meta conceit, there’s a sincerity too; an implicit understanding of the way most show biz dreams die in bitter frustration. Heidi’s treacley ballad “A Way Back to Then” toward the end of the evening – about childhood innocence and “butterfly wings” – is a cringe-inducing misstep into preciousness, and Hunter’s obsession with taking [title of show] to Broadway is artistically contemptible; but that's his dream, and in the end there’s something uplifting about playing along as it comes to life.