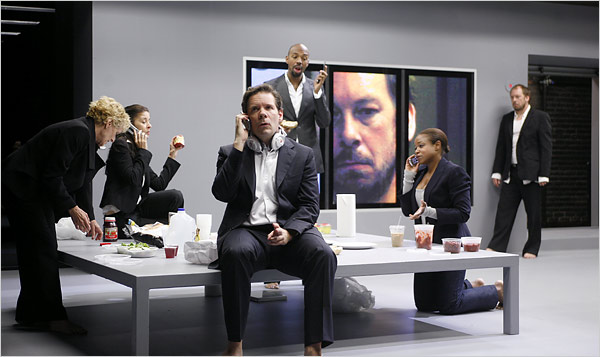 The set for director Ivo van Hove’s sensational but frustrating production of Molière's The Misanthrope tingles with exquisite cleanliness – though not for long. As the play beings, we gaze into a sleek shiny box that’s nondescript but not devoid of style: it seems just a few minimalist furnishings away from a feature in the Times’s Home & Garden section. The VIPs who chatter, prevaricate and flatter their way through the room are the curdled cream of contemporary cosmopolitan society; dressed in requisite black with blithely bare feet, they keep one eye and ear perpetually trained on their laptops, Blackberrys, iMacs and cellphones. It’s refreshing to see these pervasive mannerisms of the elite wired world so lucidly skewered onstage, where one can’t really be important unless one is seen chatting with somebody somewhere else.

Watching this cross-section of the chattering class swap false flattery while simultaneously stabbing each other in the back via text message, it soon becomes abundantly clear why Alceste, the titular misanthrope, should feel such contempt for his contemporaries. We get a vicarious thrill when he rolls around on their impromptu dinner table, soiling himself and the fastidious space with foodstuffs and condiments. But is the splattered food and strewn garbage intended as a physical metaphor for that eternal mess of hypocrisy rotting away under the thin veneer of bourgeois civility? If so, it strikes me as surprisingly facile considering the talent and intelligence of all involved. The most talked about moment of van Hove’s revelatory Hedda Gabler, in which Judge Brack seductively soaked Hedda’s submissive head in tomato juice, afforded insight into the dynamics between Ibsen’s characters. In The Misanthrope, this greatly amplified motif of food-fighting and trash-tossing feels imposed and gimmicky, albeit great fun to watch. A constant simultaneous video feed on one wall provides ravishing close-ups of the cast as their high dudgeon careens backstage, then spills into the house and ultimately out onto the street, to great comic effect.

What isn’t fun is the repetitious, screeching histrionics that convulse each member of the cast, one by one, over and over again. When the first sudden surge of screaming and grappling explodes between Philinte and Alceste, the effect is surprising, if a bit forced. But as each member of the otherwise brilliant ensemble blasts off into their heightened howling and spitting – seemingly divorced from context of the play – the spectacle quickly takes on the qualities of one of those primal “scream” therapy sessions made famous by John Lennon. Like the food fighting, these repetitive outbursts read as either a juvenile savaging of high-class politesse or an arbitrarily imposed conceit. If there’s some deeper significance here, it’s largely drowned out by the tedious white noise of the cast’s caterwauling.

The Misanthrope continues at New York Theater Workshop through November 11th. Tickets cost $65 but $20 tickets for all Sunday evening performances can be purchased in person at the box office.