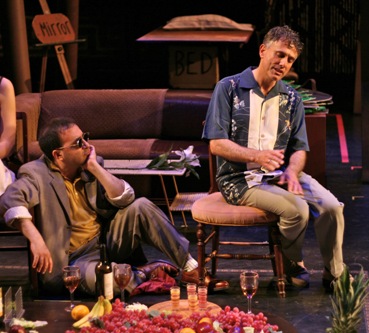 If you’re anything like me, there sits somewhere on your bookshelf a neglected copy of Aristotle’s Poetics that hasn’t been opened in years. And if you’re even more like me, the odds of you wading through those dense waters again are about as slim as Kansas legalizing pederasty. Of course, that’s not to say there aren’t stimulating and, yes, immensely influential philosophical ideas set forth therein. The extant text of The Poetics was transcribed from Aristotle’s lectures on the nature of theatrical tragedy: why our species craves imitative narrative performance, what separates a well-made tragedy from cheap melodrama, and the alchemical power of catharsis – to name a few.

Certainly important stuff but not quite the ideal blueprint for a lively night of theater. So it’s impressive indeed that actor/writer/OBIE winner David Greenspan and director David Herskovits have succeeded in plucking ‘totle’s tome out of the academic ether and landing it onstage without a trace of pedantry. It’s a surprisingly vigorous theatrical experience that’s didactic but never dull and heady without causing headaches. Which is no small feat, because Act I is 45 minutes of Greenspan alone on stage armed with nothing but notes from a 2,200 year old lecture. Oh, and his considerable talent. It’s a testament to Greenspan’s charisma and ingenuity as a performer that I remained entranced and amused throughout.

All theater is to some extent didactic, it’s just a question of degrees. (Even if there is no overt “moral”, we still consciously or unconsciously cull lessons from each character’s behavior.) While the first half of Target Margin’s evening makes philosophy fun, Act II makes fun philosophical, with a fast and loose adaptation of Plato’s Symposium. Called Dinner Party, the company seizes the stage with charming deconstructive playfulness to perform Socrates’s “Let’s talk about love” dialogue as a New York art-professional dinner party. The atmosphere is breezy and buoyant, with countless drinks knocked back and myriad ideas about love set forth with physical inventiveness and inspired stagecraft. The overall effect is that of a vibrant philosophy lesson unleashed by brainy clowns, and the Target Margin company deserves a lot of credit for having the guts to tackle this challenging source material and render it into theater with such gusto. Catch it before it’s gone; they do the heavy lifting of your forgotten classics off the bookshelf so you don’t have to.

The Argument & Dinner Party continues for a mere $15 through June 30th at The Kitchen. Photo of Steven Rattazzi and David Greenspan by Hilary McHone.

#Act I
#act II
#art
#david
#david greenspan
#fun
#kitchen
#love
#new york
#the kitchen
#theater
Do you know the scoop? Comment below or Send us a Tip