Opinionist: Saint Joan of the Stockyards 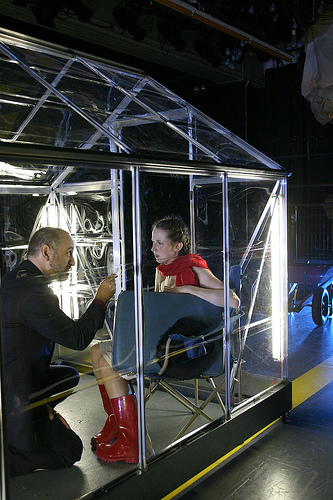 Not long after their triumphant The Threepenny Opera (and the not-so-triumphant Wall Street crash of 1929), Bertolt Brecht and his close collaborator Elisabeth Hauptmann began assembling Saint Joan of the Stockyards from the spare parts of Happy End, the critically maligned follow-up to Threepenny (both with music by Kurt Weill). The story was heavily influenced by Brecht’s first dip into Marxism, not to mention Upton Sinclair’s The Jungle and George Bernard Shaw’s Saint Joan and Major Barbara. Set in 1920s Chicago, their version of Joan of Arc illustrates, from the workers’ vantage point, a crisis in the meat market brought on by the machinations of one Pierpont Mauler, who treats his laborers even worse than today (see Fast Food Nation). Rising up to oppose him is the sincerer-than-thou Joan Dark, a soup-and-Bible dispenser for the Black Straw Hats, a Christian charity. When Joan's attempts to arbitrate between Mauler and the locked-out workers runs afoul of her superiors in the Straw Hats, she’s cast out among the huddled masses, where she struggles to discern religion’s place in the workers’ battle for justice. (You can probably guess where Brecht thinks it belongs.)

It's a long, dense slog. Though director Lear deBessonet and her talented ensemble hustle vigorously to inject some dynamism into the proceedings, they can’t really shake off the play’s stuffy, academic atmosphere. (The inspired set design by Justin Townsend succeeds where all else fails, pitting the audience on opposite sides of a narrow runway down which the cast races like kite-flyers in search of a breeze.) As written, Joan and the capitalist pigs who oppose her are one-note caricatures with a penchant for tedious speechifying and bloodless statements of ideology. You’d think the play’s take on the meat industry’s foul practices, capitalism’s all-consuming machinery, and the role of religious charities in helping/brainwashing the indigent would be as relevant as ever. But in Saint Joan we find Brecht (and Hauptmann) still wrestling with his theories of “epic theater” and “alienation effect”. A strident opposition to nuance runs through their distended agit-prop, and the unhappy end hangs cold and affectless as a slab of raw meat.

In fact, I began to wonder whether Saint Joan of the Stockyards can really resonate with us at all, or if perhaps an edited version might fare better. (Even in the last year of his life, Brecht still struggled to make these characters more multi-dimensional without diluting his message.) As deBessonet points out in a production note, Brecht’s work will not pass into the public domain for another two decades, so any textual deconstruction is verboten. That’s a tough break for the audience, leaving us stuck with a 90-minute first act that plods along like a picket line in its umpteenth hour. And maybe it’s my own musical bias showing, but Kelley McRae’s plaintive score doesn’t exactly liven things up (though her voice sure is purty). Brecht without Weill can be like dry toast without the jam; the former’s significant but varied oeuvre contains as much dull speechifying as it does incisive drama and humorous dialogue. It’s Weill’s music that makes much of Brecht’s heavy-handed pedagogy palatable. Without that, the meal can be a struggle to force down.