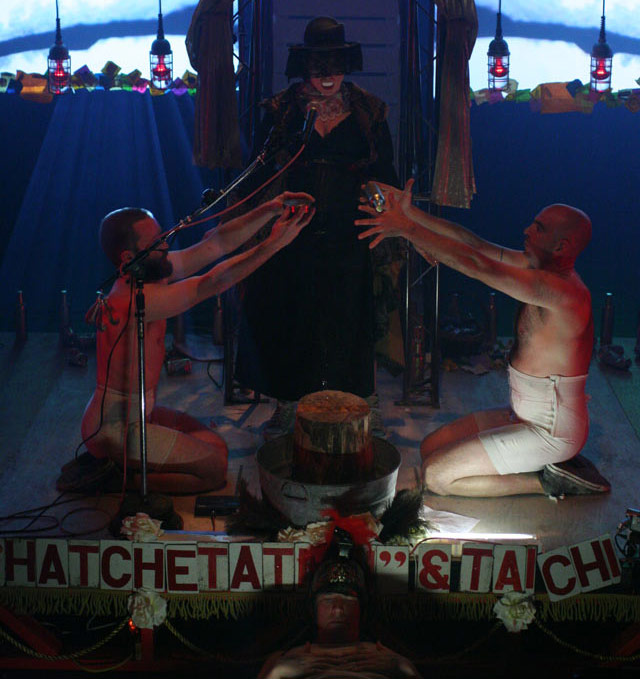 Just like today's gang of socially conservative zealots, late 19th century temperance crusader Carrie A. Nation had an unshakable conviction that she was on a mission from God to purge America of vice. She'd no doubt be appalled to know that her life's work has been appropriated by the outre transgressors in Radiohole—Brooklyn's fearlessly debauched four-person theater collective—for use in their latest provocation, which also takes visual inspiration from avant garde filmmaker Kenneth Anger, whose oeuvre includes such titles as Lucifer Rising.

If you drop acid at just one Off Broadway show this year, make it this one. That's not to say you need to get high to "get it," but Anger/Nation finds Radiohole toning down their trademark frenetic style while reaching for something transcendent, with a pacing that is, by their standards, almost minimalist. To be sure, there's still plenty of ribald absurdity—Scott Halvorsen Gillette hangs brain the entire show, the wild-eyed Eric Dyer's long puppet dick sprouts fingers to grip the microphone stand—but the emphasis here is on ritual and trance, made sublime thanks to the troupe's consistently stunning sound design and the addition of hallucinatory video. Even without any chemical enhancers (besides the free beer), you can count on a contact high.

Though they have the entire sprawling cavern of the Kitchen at their disposal, the performance is staged on roughly the same dimensions as their cozy home turf in Williamsburg's Collapsable Hole. But behind the stage, a high staircase rises up into the vast darkness, from which a very pregnant Maggie Hoffman descends for the show's first entrancing tableau, of which there are several. A scene in which Dyer and Gillette take turns bending over so the other man can shoot him with an air rifle goes on perhaps a bit too long, but there's so much else happening simultaneously—Hoffman at the top of the stairs chanting into a microphone, a dozen little video screens flickering over the audience at the end of fiberglass rods—that it's never boring. In fact, it becomes a kind of meditation. 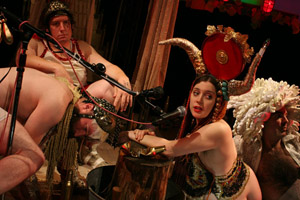 There's always been something refreshingly reckless about Radiohole; what makes their work exhilarating is the sense that they're genuinely taking risks, not merely pretending to take risks. When Dyer gives the theater editor for Time Out NY a vulgar, unsolicited lapdance while wearing a dirndl miniskirt without underwear, or Hoffman takes an axe to a dozen beer cans (spraying the audience in the process), you know you've gotten as far away from Broadway's calculated enervation as possible.

At the same time, Anger/Nation finds the ensemble in a self-reflective mood. The other female member, Erin Douglass, is on maternity leave. Dyer's talked about getting older with "the wolves" chasing him. Gillette, after a long absence, has resurfaced with his balls fully out, but the production ends with a peculiar, fifteen minute post-show debate, house lights fully up, between him and Dyer about the aesthetics of a certain unnamed avant-garde theater company. Though partly a parody of pretentious post-show "talk-backs," one senses a sincerity in Gillette's weariness with the "libidinal" aesthetic Dyer advocates. The heady discussion proved too inside-baseball for some—one boor yelled "Get a room!" and left in a huff—but to me it was a compelling and, well, ballsy way to come down off their most grandiose production yet.

#anger/nation
#best
#experimental
#new york
#nyc
#play
#radiohole
#review
#the kitchen
#theater
Do you know the scoop? Comment below or Send us a Tip