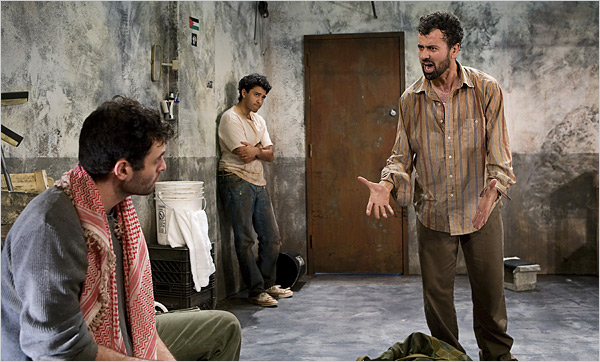 When Ilan Hastor, a Jewish Israeli, wrote Masked in 1990, he was a left-leaning college student opposed to the occupation. But despite his personal politics, his widely-produced play avoids any dogmatic depiction of Palestinians as innocent victims and Israelis as ruthless oppressors. What concerned Hastor then was what made the anguish of Israel universal; how three brothers are inexorably reduced to brutes by the duress of occupation. Change the names and dialects and Masked could just as well be set in Algeria in the ‘50s, Warsaw in the ‘40s or Iraq today.

Given its volatile milieu, Masked has all the potential to be a riveting 90 minutes of theater, but the overall effect is as oppressive as the subject matter. The main problem is Hastor’s dully straightforward storyline: Daoud, the oldest of several Palestinian brothers, is suspected of being an informant to the Israelis. Turns out he is. After being worked over in the back of a butcher shop by his younger brother Na’im, a passionate member of the resistance, Daoud confesses and must be made an example of. Khalid, a teenage third brother, struggles desperately to reconcile the brothers and save Daoud from his fate but, in the end, he learns that his spot on the sidelines is actually in the crossfire. Along the way there is much yelling, gnashing of teeth and, inevitably, a spiteful volley of spit in the traitor’s face. But with nowhere for Daoud to run to and zero dramatic revelations, the histrionics fast become repetitive.

There are no nuances in the writing or acting to even momentarily alleviate the gloom in this searing slice of life under occupation. And the three actors involved seem strangely unconvincing in their roles – there’s something empty about their intensity; the dialogue that hurtles from their bodies rings false, as if they haven’t yet found a way to make the characters their own. Either the actors are draining the play of vitality or vice versa, but the bottom line is an ensemble that seems more like personifications of three distinct ideologies than fully-formed people. While there’s nothing funny about life in one of the world’s worst hellholes, it’s also true that a biting sarcasm – or at least a rueful sense of absurdity – is often the last solace left in desperate times. Hastor’s characters (and his audience) could greatly benefit from even a couple moments of leavening humor to break the tension – although it’s understandable that a Jewish Israeli student who dared write a play from the Palestinian point of view might neglect this. His novice work was built on good intentions, but those don’t pave the way to stirring drama.