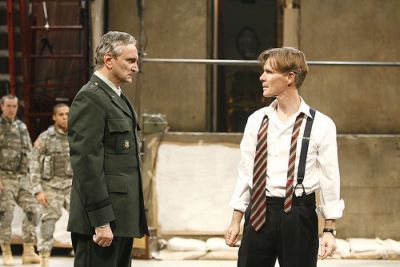 Movie blogger Jeffrey Wells counts 12 films about America’s entanglements in the Middle East coming down the pipe this year. It’ll be some feat if even one of them matches the urgency, power and electricity of Iphigenia 2.0, Charle’s Mee’s self-described “sampling” of Euripides’s Iphigenia at Aulis. You may know the essential storyline: Agamemnon’s army is left stranded en route to the Trojan War when the goddess Artemis stifles the wind to punish him for hunting a sacred deer. Before Artemis will let the army sail on, Agamemnon must make it up to Her by personally slitting his daughter Iphigenia’s throat. It’s an unthinkable act that Agamemnon struggles to avoid, but his soldiers ain't having it. Death is certain for some of them; if the man who sends them to it can’t stomach that sacrifice himself, how dare he demand it of others?

It’s this brutal calculus of combat that Mee renders with such exquisite force. He keeps the classical names and contours of the plot but in his hands the situation is absolutely au courant. On a sharply lit stage of sandbags, foxholes, maps, ships’ rigging, pin-ups, megaphones and assorted modern military accoutrements, Mee artfully extracts the still-throbbing heart of the myth and lobs it right into the lap of America’s lazy, lumbering imperialism. That the tale is made modern without any feeling of high-concept contrivance is a testament not only to Mee’s talents but also his grasp of history’s essentials: war is as hellish as it is inexorable. In Mee’s rendition it’s also highly entertaining: there is a palpable sensation of menace that broods and snakes throughout the action, but there’s also wicked comedy, dazzlingly choreographed dance numbers and stirring music. The overall effect is a full theatrical meal fit for a Greek.

The ensemble assembled by director Tina Landau is marvelous almost without exception. The chorus of baby-faced U.S. infantrymen are particularly stunning; the insouciant air with which they snack on flavored ice or wearily toss a football perfectly evokes the mannerisms of today’s sand-blasted cannon fodder, as seen in such documentaries as Gunner Palace. The female chorus of Iphigenia’s debutante friends – “who partied for three days and nights en route to Aulis” – hilariously personify the decadent culture that blissfully tunes into Dancing with the Stars while tuning out carnage abroad. As Menelaus, Rocco Sisto is riveting as the general disgusted with Agamemnon’s reluctance to face the true horror of war. In one of the play’s many breathtaking moments he nails every liberal in the theater right between the eyes: “Is it all a matter of distance, then? If you were an old man sitting at home by the fire you would tsk tsk the war. Even as you went out to dinner and the theatre you might even be appalled by it but not for more than a moment or two before you got on with deciding which wine to have with your fish.”

The Signature Theater is devoting their entire season, which has just begun, to the work of Charles Mee (plus an Edward Albee premiere in the spring.) He’s an exciting and timely selection: a trenchant critic of U.S. imperialism since the Vietnam era, with over a dozen books on American history and international relations, and a boldly unique playwright, whose kaleidoscopic texts synthesize spare parts and bric-a-brac from myriad sources, transforming them into vivid theatrical extravaganzas. As Mee puts it: “There is no such thing as an original play. None of the classical Greek plays were original; they were all based on earlier plays or poems or myths… One of the great pleasures in a work of art that knows it comes from the culture is that, inevitably, inherently, it contains a tension between the past and the present, the given and the possible, the enduring and the ephemeral.” At $20 a ticket you can’t afford to miss this opening salvo of Signature’s Mee season; it’ll stay with you long after the wine and fish are forgotten.