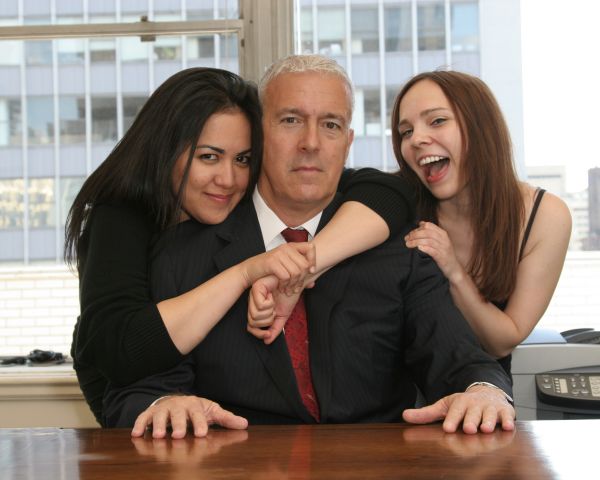 I Dig Doug, a new production in this year’s Fringe Festival, concerns a status-obsessed uptown debutante who decides she should so get involved in presidential politics. When the farcical story begins, the unnamed teen (Karen DiConcetto, called Girl in the program) and her equally self-absorbed friend Nicole (Rochelle Zimmerman) are coasting along on their parents’ money, only mildly concerned about their imminent college application essays – Girl is smart enough to know that if they “can get into Bungalow 8” they can get into Harvard. But Girl’s perfect world is soon torn asunder when she discovers that her personal hero, a lovelorn reality TV star, is nothing more than a phony, craven opportunist. If a Girl can’t believe in reality TV, what can she believe in?

So it is that she finds solace in a Howard Dean-esque presidential candidate named Douglas Ward while watching C-Span 2 – the only channel she can find that’s not breathlessly reporting on her fallen idol. (“C-Span? Must be a new channel.”) When Ward unloads invective against the media’s fixation with the life-cycle of celebutards, Girl is totally inspired and whisks an unwilling Nicole on a road trip to the Iowa caucus, where she intends to meet Ward and help him past the velvet rope to the White House. What follows is a zany, picaresque tour through America’s bloated underbelly; along the way Girl meets a distraught Waffle House waitress whose son is being sent to Iraq (as part of touring production of Cats); an armed animal rights activist who thinks all guns should be legal (provided they’re aimed at people, not critters); and a careerist small-town newscaster who explains to Girl how a story like “Boy Caught Bringing Game Boy to School” can be sexed up into “Terrorist Caught With Bomb!” Thus her road trip to meet Doug becomes an absurdist – and at times overly tendentious – journey into our national heart of darkness. Or maybe "head of emptiness" is more apt these days.

It’s mostly breezy blue-state fun, with a jab at crass New Age commune commercialism thrown in for good measure. Director Bert V. Royal, who made a splash in 2004 with his play Dog Sees God – about a grown-up Charlie Brown & Co. – helps airbrush the parody’s weaknesses (some scenes sink into stale sketch comedy territory) by keeping things humming along at a fast-food clip. DiConcetto plays the lead airhead with such good-natured aplomb that you probably won’t mind that it’s a character that’s been done to death. Her partner Rochelle Zimmerman gets to show her range by portraying all the oddballs Girl meets on the path to Doug; the audience roared with laughter at every turn, but I found Zimmerman’s caricatures uneven – some finely drawn, others too broad. The script is also to blame in this regard; with some further tightening, this torn-from-the-tabloids send-up of pop culture pabulum could be recycled for further consumption beyond the Fringe. It could also be that in the wake of the deadliest bombing since the start of Operation Iraqi Freedom four long years ago, I wasn't in the right mood to laugh off the astonishing American apathy that the play so blithely lampoons.

I Dig Doug (myspace) continues through Friday at The Soho Playhouse [15 Vandam St.] as part of The New York International Fringe Festival. Photo by Neilson Barnard.