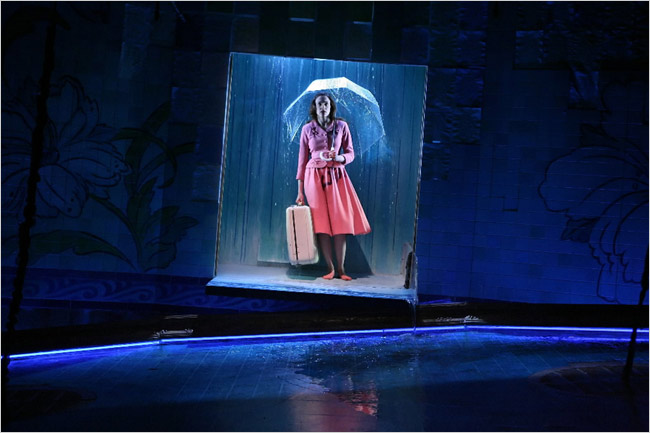 The Greek myth of Orpheus and Eurydice is the quintessential tale of love lost, nearly regained and then agonizingly lost again. When Eurydice dies on their wedding day, her musician lover Orpheus, "father of song", journeys down to Hades to rescue her. The man shreds so hard on the lyre they let him escort Eurydice back to the land of the living, with the caveat that she walk behind him the whole way – if he so much as sneaks a peek at his beloved before they reach terra firma, she'll be lost forever. Of course all this happened way before D.A. Pennebaker's documentary Don't Look Back was released; had Orpheus been familiar with that particular title mankind might have been denied one of the most heartbreaking love stories ever conceived, not to mention a moment of 'D'oh!' unrivaled by Homer himself.

Now a deluxe production of the myth, seen from Eurydice's vantage point, is receiving its New York premiere at the Second Stage Theater. Sarah Ruhl sets out to question the established narrative of the myth using a very intriguing premise: what if Eurydice (Maria Dizzia) actually preferred to stay in Hades with her dead father (Charles Shaw Robinson) instead of obediently following her man up to daylight – anybody ever think of that? But what's intellectually provocative about that conceit is often undermined by the cloying dramatization of Eurydice's charming little jaunt. The play's tone, at least under Les Waters's direction, seems better suited for a tidy segment on This American Life than a vital theatrical experience.

There are moments of penetrating sentiment, as when Eurydice's father learns of her betrothal and, from his remote corner of Hades, pantomimes escorting his daughter down the aisle. The scenes between Eurydice and the Lord of the Underworld (Mark Zeisler) are saved by Zeisler’s unctuous aplomb, and the three actors playing stones of the underworld all but steal the show with their constant hectoring about Hades's rules (No crying! No sleeping! No privacy!) But other segments languish inertly like lovely illustrations in a children's book; one particularly static scene consists of Eurydice and her father just sitting around Hades reminiscing. (Eurydice: "Remember the time she gave me a doll?")

There’s a tendency here to slide from tender to twee. I suppose it's nice in theory when two good looking kids canoodle on the beach, but who really wants to sit and listen to their sweet nothings? It's all tastefully whimsical in a children's theater sort of way – Russel Champa's rich lighting imbues Scott Bradley's sumptuous set with a fanciful ambiance – but ultimately the affectless whole amounts to less than the sum of its parts. So when the fairy-tale treatment tries to depict the intense pain of losing a loved one, it ends up feeling unearned. Looking back, I felt nothing.