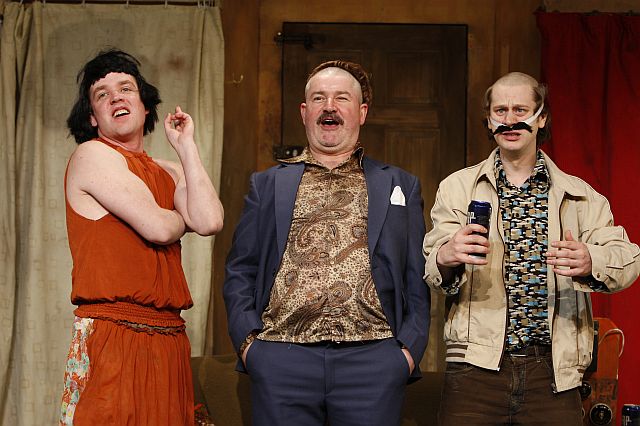 In The Walworth Farce, Enda Walsh’s pitch black comedy currently in from Ireland at St. Ann’s Warehouse, all the world’s a stage in a squalid council flat, and all the men and women merely amateur players. Dinny (Denis Conway), a heavyset man with an air of menace, is the author of a deliriously farcical play that he and his two sons, Blake (Garret Lombard) and Sean (Tadgh Murphy), perform every day for the pleasure of their triple-threat dad. His madcap opus stars a soi-disant brain surgeon named Dinny and concerns his pitiful scheme to cheat his estranged brother Paddy out of his inheritance.

Dinny and his boys play all nine roles, and they’re at once terrible and terribly funny. True to the rules of farce, Blake and Sean dash about the apartment to execute meticulously choreographed exits and entrances and quicksilver costume changes. But no matter how much they sweat, it’s never quite good enough to please Herr Director, and the performance repeatedly falls apart as Dinny breaks character to give notes. And finally there’s a knock at the door – one that’s definitely not in Dinny's script.

There are reasons why the megalomaniacal yet poetic Dinny drives his boys through this daily theatrical ritual, but I won’t spoil them here. Suffice it to say that the play has its roots in Dinny’s past, and is meant as a happy alternative to the real story, which was not tied up in a perfectly farcical denouement. Walsh’s play ricochets brilliantly between Dinny’s delirious farce and the tragic “reality” of his family’s real circumstances, while ultimately illustrating the unquenchable human need for stories.

As The Walworth Farce blazes toward its savage climax, there are a couple instances where Walsh is unnecessarily explicit, connecting narrative dots in a way that Edward Albee, an inescapable influence, never would. But that feels like a minor quibble; all in all The Walworth Farce is an inspired near-masterpiece; an intensely funny and brutal theatrical achievement that's not to be missed.

#brooklyn
#druid
#dumbo
#new
#play
#review
#st anns warehouse
#The Walworth Farce
#theater
Do you know the scoop? Comment below or Send us a Tip