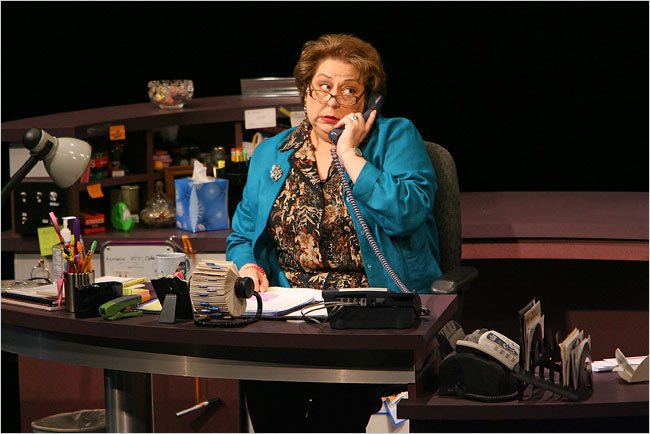 If you’ve ever spent a day working in an office, you'll immediately recognize Beverly Wilkins, the titular character in The Receptionist, Adam Bock's darkly comic study of corporate culture in the age of Cheney. Beverly, played here with spellbinding hilarity by Jayne Houdyshell, is the polite but potentially nasty gatekeeper for the "Northeast office" who, when she's not gossiping with friends and her coworker Lorraine (Kendra Kassenbaum), puts callers through to her boss's (Robert Foxworth ) voicemail. She's the one with the big mouth and bigger frame, who keeps a Pooh bear on her computer monitor and an assortment of cutesy pens she will only loan out with great reluctance. The play spends much of its seventy minutes reveling in the quirky behavior of drones like Beverly and Lorraine – there isn't much at first in the way of a story, just a slight whiff of menace wafting from Mr. Dart (Josh Charles), a smooth gentleman caller from the "Central office" who flirts with Lorraine while waiting around for the boss.

If you’re going to go see The Receptionist – and I recommend it, if only for Houdyshell’s pitch-perfect portrayal of Beverly – then read no further; ahead there be spoilers. Or spoiler, rather. In Bock’s OBIE-winning play The Thugs he proved adept at satirizing the hellish details of office life, while simultaneously milking narrative suspense from a never quite articulated evil. (In that play a team of paralegals went from neurotic to nuts when workers on other floors began mysteriously dropping dead.) One of the virtues of The Thugs is that Bock knew just when to stop disclosing information; he seemed more interested in observing how ordinary folks cope with sinister forces than in detailing the sinister forces themselves.

But in the last third of The Receptionist it’s revealed that the latent tension isn’t due to ordinary office politics but rather the business of the "Northeast office" itself, namely torture. Here Bock not only lets the air of mystery dissipate at once but also smothers the play in pat, liberal didacticism; it becomes a "message play" about America's particular twist on the banality of evil. The premise – that our nation of bourgeois office workers is just one or two cubicles removed from manning the torture chamber – is certainly timely, but as a plot point it feels obvious and contrived. In reaching for a sort of politicized Twilight Zone denouement, Bock makes unnecessarily explicit what a more seasoned playwright like Edward Albee – an inescapable influence – would have left open and evocative. It's a delicate balance not easily achieved; at least Bock and his actors are entertaining to watch as they try.