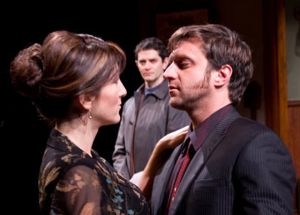 When Harold Pinter’s masterpiece The Homecoming first premiered on Broadway some four decades ago, the dramatized hostility was met with equal hostility from the bourgeois audience, as witnessed by the playwright himself:

One of the greatest theatrical nights of my life was the opening of The Homecoming in New York. There was the audience. It was 1967. I'm not sure they've changed very much, but it really was your mink coats and suits. Money. And when the lights went up on The Homecoming, they hated it immediately. 'Jesus Christ, what the hell are we looking at here?' I was there, and the hostility towards the play was palpable. You could see it.

The great thing was, the actors went on and felt it and hated the audience back even more. And they gave it everything they'd got. By the end of the evening, the audience was defeated… I thought it was a great night. And that was a real example of a contest between the play and the audience. There's no question that the play won on that occasion, although that is not always the case.

Forty years on, Broadway audiences have caught up a bit with the Nobel Laureate; they’re slightly less threatened by narrative ambiguity or a milieu that lands them far from Noel Coward cocktail territory. In the current Broadway revival, the play’s savagery still shocks and surprises, but the black, bristling comedy resonates even more, especially in the hands of this smart, talented ensemble. True, Ian McShane is a bit too sprightly as the warped, withered Max, but Eve Best (Ruth) and Raúl Esparza (Lenny) are both so mesmerizing that they ultimately eclipse McShane’s performance. Another standout is Michael McKean; he imbues the role Max’s chauffer brother Sam with all the absurd, fastidious pride it demands.

If you’re yet unfamiliar with the story, it’d be best not to spoil it, even though the events of the play are few and simple. It’s enough to know that the appallingly dysfunctional action, set in working class North London, centers on a surprise visit home made by Max’s son Teddy (James Frain) and his wife Ruth. The play is a disorienting carousel of domination, desperation and lust, made thrilling by Pinter’s bitter humor and his way of evoking the essence of a relationship while leaving much open to interpretation. It’s not a political play in any direct or allegorical sense, but the Vietnam-era subtext – that brutality begins at home, with paternal warnings like “You’ll drown in your own blood” – is obviously just as palpable today.

Age 77 and done writing plays, Pinter’s public statements are more explicit but just as unsparing and accurate, as evinced by a recent interview:

The longer I live the more I feel I have an obligation to be very concrete and precise about the way power and hypocrisy are manifested in this world. I do think the American president and our Prime Minister are gangsters.