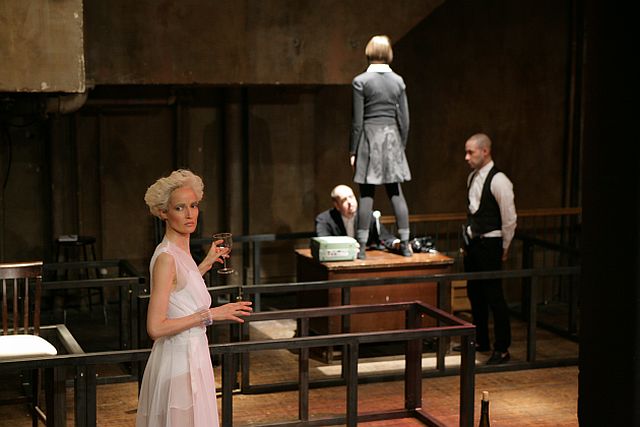 Director, playwright, actor and outcast surrealist Antonin Artaud is perhaps best known for the manifestos set forth in his book Theater and Its Double, which envisioned a new form of radical performance he dubbed “The Theater of Cruelty.” Artaud intended to shock audiences out of complacency by replacing the familiar comforts of naturalistic psycho-drama with a surreal, sensually graphic theatricality, one that traded escapism for confrontation and – Artaud theorized – would rock the bourgeois establishment with “humor as destruction.”

His play, The Cenci, was produced to demonstrate these theories and is loosely assembled from Shelley’s verse drama of the same name, which dramatizes the true story of Roman Renaissance nobleman Francesco Cenci, a sick puppy with a penchant for incest who paid the Papacy to indulge his debaucheries. Finally fed up with the injustice, his abused family murdered him and tried to make it look like an accident – a failed gambit that resulted in their torture and execution, despite a great outcry from a public well versed in Francesco’s appalling criminality.

The cast throws themselves into Jahnke’s kinetic staging – which leaps liberally from dance to live rock to stark minimalism to suddenly frozen tableaux– with great brio: The distinctive Anthony Torn, familiar to those who love a good Richard Foreman romp, is all voluptuous malevolence as the wretched Francesco Cenci; Anna Fitzwater brings laser precision to the role of his pill-popping wife Lucretia; Kobi Libii plays Francesco’s son Giacomo with a delightfully smooth detachment; and as Francesco’s servant Andrea, Joshua Seidner stands out with a mysteriously compelling stage presence. So much reverberates across the wide performance space during the show's brief hour that I was taken by the rare urge to see the production again as soon as possible. Jahnke’s The Cenci is riveting not just for his ingenious theatricality, but for the way his meticulously cultivated atmosphere of doom illustrates the corrupt mechanisms of social and domestic authoritarianism – an illustration the iconoclastic Artaud would have been glad to see fulfilled.