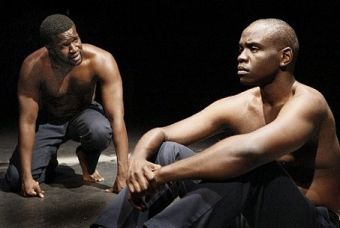 In The Brothers Size, three shirtless black men struggle for scraps of peace and prosperity under the blazing sun of some unnamed, dirt poor southern town. Ogun and Oshoosi Size are two recently reunited brothers – the older, more responsible Ogun has taken Oshoosi in after he’s released from prison. Oshoosi makes a halfhearted go at rehabilitation working at Ogun’s auto-body shop, at least until the appearance of his old jailbird buddy Elegba, who surfaces with keys to a “found” car and a road map to recidivism. Inspired by West African myths, The Brothers Size examines the way prison culture seeps into society’s fringes like brackish flood waters.

The 90-minute one-act takes place on an almost bare stage, with the audience seated on three sides. As the play begins, a white circle is drawn on the floor with sand; off to the side, a percussionist (Jonathan M. Pratt), provides incidental music that is at turns propulsive and softly dulcet. Performing with fully-engaged physicality, the excellent trio of actors charges in and out of the circle with unflagging passion. Ogun (Gilbert Owuor) is devastated and furious with Oshoosi’s “fucked up” life, Oshoosi (Brian Tyree Henry) is boiling over with frustration at Ogun’s unrelenting harping on his mistakes, and the bad-seed Elegba (Elliot Villar) is there to feed the fire of their rancor with just a look from his piercing eyes. In tragic slow-motion, we see the brothers Size torn apart again; imprisoned by their past patterns.

The play, written by Tarell Alvin McCraney when he was still studying playwriting at Yale and produced in collaboration with The Foundry Theatre, was a hit at January’s Under the Radar Festival. The sparse staging works well in isolating McCraney’s often penetrating dialogue; when exploding from these enthralling actors, the language – paired with the live music – at times achieves a ritualistic lyricism. And there are moments of truly affecting pathos, as when Elegba tells the older Ogun how Oshoosi cried out his name during his first night in jail, yelling for Ogun again and again until his hardened cellmates were overwhelmed by a sudden longing for their lost brothers. Unfortunately, The Brothers Size repeatedly succumbs to stretches of sluggish lethargy; too often the actors are cornered by tedious, expository soliloquies about unseen incidental characters and events. The actors pour sweat as they tug at McCraney’s sluggish narrative, and at times it perks up to meet them – just not often enough to keep the play’s engine from stalling languidly.

The Brothers Size continues at The Public Theater through December 23rd. Tickets cost $50.

#Arts and Events
#As
#culture
#events
#fire
#flood
#live music
#Music
#offbroadway
#public theater
#Radar Festival
#the public theater
#theater
#theatre
#thebrotherssize
#thefoundrytheatre
#thepublictheater
#tickets
#West African
Do you know the scoop? Comment below or Send us a Tip
A new Gothamist is coming! We’ve moved comments over to our beta site. Click here to join the conversation and get a preview of our new website.