Opinionist: The American Dream & The Sandbox 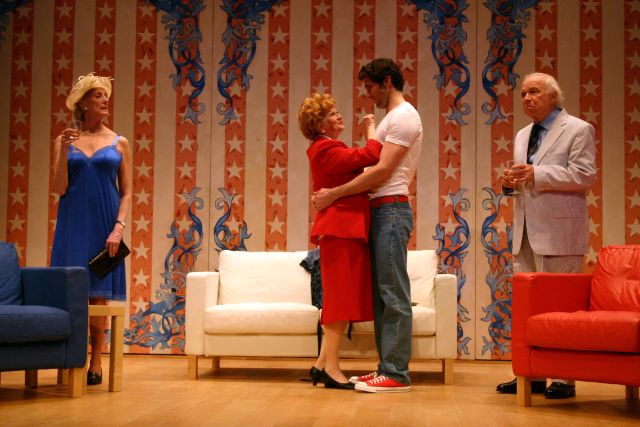 Edward Albee, who turned 80 last month, has been enjoying a well-deserved center stage spotlight since last fall, when Second Stage produced a vital revival of The Zoo Story, which was coupled with a newly penned prelude called Homelife. A new play, Me, Myself and I, was well received in Princeton last January, while The Occupant, another new work, will premiere next month. Now two of Albee’s earliest exercises, the interconnected one-acts The American Dream and The Sandbox, are currently on view at Cherry Lane Theatre, in a production directed by Albee himself.

I say ‘on view’ because the evening does have the feeling of a trip to the museum, though that’s not to say the exhibit isn’t worth touring. The first act is The American Dream, Albee’s take on the Theatre of the Absurd that was quite a sensation at the time for its bold departure from naturalism, narrative and other escapist niceties that bourgeois audiences had come to expect. Instead, his bewildered characters talk in cryptic circles, and in lieu of plot, it’s Albee’s bracing contempt for the self-serving lifestyles of the well-to-do that propels the evening forward.

Mommy and Daddy, played with great brio by Judith Ivey and George Bartenieff, exchange increasingly outrageous banter while awaiting the arrival of mysterious guests in a living room garishly decorated with Old Glory colors. (In a choice that feels heavy handed, the first act’s color scheme is entirely limited to red, white and blue.) In due time, Grandma (Lois Markle) stumbles in, followed by the arrival of a confused Mrs. Barker (Kathleen Butler), who gladly takes off her dress. Finally a strapping Young Man (Harmon Walsh) wanders on to confess he feels nothing because he’s just a “type.” He is also, in Grandma’s eyes, the titular dream incarnate. 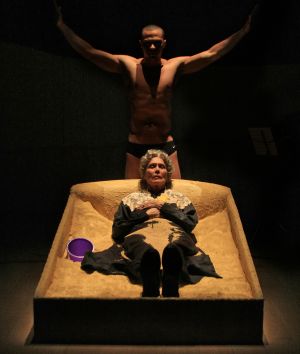 In his much shorter play The Sandbox, written in 1959, the patriotic colors have been replaced by somber blacks, a musician (Daniel Shevlin) plays upstage, and a different but equally gorgeous Young Man (Jesse Williams – how Albee loves his hunks) does exercises stage right wearing nothing but a Speedo. Here Mommy and Daddy have come to finally discard the old crone who’s been crowding their apartment with her loud trips to the bathroom. And the hot Young Man who was the American Dream in act one has now become the Angel of Death.

Albee, an orphan taken in by cold but rich parents, was in his early thirties and newly famous when he unleashed, in both plays, a cold but rich indictment of our hypocritical, disposable culture. The dialogue still cuts glass, but after over four decades of avant-garde theater, what was once formally radical comes off as quaint, like so many other 1960s relics.

#cherry lane
#edward albee
#play
#review
#The American Dream
#The Sandbox
#theater
Do you know the scoop? Comment below or Send us a Tip